Lights and music open Christmas at UP Diliman 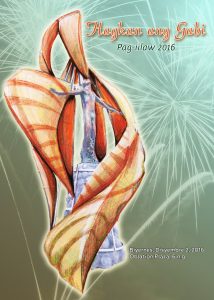 The University of the Philippines Diliman (UPD) opens the Christmas season with a musical variety show and the traditional switching on of the decorative lights on campus in the program “Hagkan ang Gabi,” to be staged at the Oblation Plaza Dec. 2 at 6 p.m.

With the Christmas 2016 theme “Himig ng Diliman,” the season’s opening salvo features an interesting spread of the various sounds and rhythms on campus that blend and harmonize into a grand musical expression.

Opening the program is Carol Bello, a UP alumna and singer-composer of indigenous and contemporary songs. Bello is the vocalist of Kalayo Malaya (formerly Pinikpikan Band), noted for its advocacy for Filipino Roots/World Music.

Also featured is the acappella student group ConChords, who will perform Rivermaya’s “Panahon Na Naman” as interpreted by the UP Dance Company. Composed of five undergraduate students, the ConChords were first runner-up in the Akapela Open 2016.  Meanwhile, the UP Dance Company is the UPD’s resident dance company.

Drumming up the beat, the UP Perc, a group of percussion students and enthusiasts from the College of Music, will take the tempo to higher with lively performance. Following the percussions, Airdance, a pioneer in contemporary dance will thrill the crowd with their aerial arts prowess by descending from the Quezon Hall ceiling.

Capping the night is a concert by Ebe Dancel, the lead singer and songwriter of the band Sugarfree that disbanded in 2011. A UPD alumnus, Dancel has since released two solo albums: Dalawang Mukha ng Pag-ibig (2012) and Bawat Daan (2015).

At the program, UP officials led by Chancellor Michael L. Tan will recognize three varsity teams who have earned the championship in the current University Athletics Association of the Philippines (UAAP) season, namely the UP Ballroom Formation Team, UP Women’s Badminton Team and the UP Women’s Swimming Team. The UP Men’s Football Team will also be recognized for winning the top prize in the 2016 University Games, along with UP Men’s Basketball Team for their persistence and dedication in pursuit of the UAAP’s top trophy.

The centerpiece of the program is the unveiling and lighting of “Budyong” by noted sculptor and painter Toym Imao. Imao earned an architecture degree from UPD and an MA Sculpture from the Maryland Institute of Fine Arts.

In line with the theme “Himig ng Diliman” and the celebration of the College of Music’s Centennial, the Oblation was designed to be surrounded by lantern elements that take the shape of a conch shell or a “budyong” that is used as a horn, an instrument that dates back to the pre-colonial era.

The sound of the “budyong” heralds the approach of visitors, signals the start of festivities, or calls a community to a gathering.  In times of imminent danger, the “budyong” sounds the alarm to take cover from calamities or rally the army to engage an enemy on the battlefield.  The “tambuli,” fashioned from carabao horns, functions the same way.

In its 108 years, the University of the Philippines has been one of the country’s metaphorical “budyong” or “tambuli,” gathering inspired and enlightened minds from different islands of the archipelago who answer the call of higher learning and service to the nation, into its community. In its tradition of vigilance, progressive thought and action, the UP community will always sound the alarm and move against imminent threat to the liberties of the Filipino people.

Himig ng Diliman is the narrative of the struggle and dissent of its community, a hymn that serves as a beacon of direction amidst the darkness, a familiar voice in the wilderness, a song with a melody that sparks hope amidst a State that may be out of tune.

Decorative lights around Quezon Hall and along the University Avenue will also be switched on at the event.

Other activities lined up for the season are the Lantern Parade, to be held Dec. 16, and Paskong Pasinaya, a presentation of Handel’s “Messiah” by the College of Music on Dec. 15 at the Abelardo Hall Auditorium.