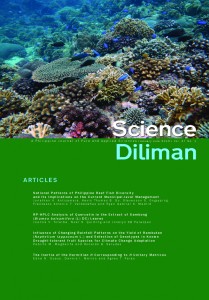 The second article written by Joana V. Toralba is entitled “RP-HPLC Analysis of Quercetin in the Extract of Sambong (Blumea balsamifera (L) DC) Leaves.” The article is the first report on the quercetin (a phytochemical used as a food supplement to boost immunity) content of the sambong leaves collected from the Philippines. Sambong is an herb valued for its health benefits especially in the treatment of colds and coughs, kidney stones, rheumatism and hypertension.

The third article “Influence of Changing Rainfall Patterns on the Yield of Rambutan (Nephelium lappaceum L.) and Selection of Genotypes in Known Drought-tolerant Fruit Species for Climate Change Adaptation” was co-authored by Pablito M. Magdalita and Ronaldo B. Saludes. The article assesses the influence of rainfall on rambutan yield and evaluates and selects tree genotypes of known drought-tolerant fruit species. It also recommends the proper choice of fruit species for climate change adaptation.

The last article entitled “The Inertia of the Hermitian H corresponding to H Unitary Matrices” is by Edna N. Gueco, Dennis I. Merino and Agnes T. Paras. According to its abstract, the authors “studied the inertia of the H (number of positive and negative eigenvalues of H) in relation to the Jordan canonical form of A.”

Printed copies will be available by August 2015.