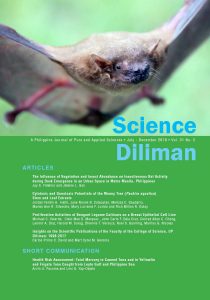 A Philippine journal of pure and applied sciences, the current issue of “Science Diliman” features four articles and a communication.

“Transitive Influence of Vegetation and Insect Abundance on Insectivorous Bat Activity during Dusk Emergence in an Urban Space in Metro Manila, Philippines” is co-authored by Jane S. Fidelino and Jelaine L. Gan.  The article is about determining the patterns of insectivorous bat activity, richness, and assemblage within an urban green space in Metro Manila.  Discussed in the article are the patterns in relation to habitat type, insect abundance, and environmental conditions, with particular focus on activity at dusk emergence.

The article examines the “cytotoxicity and genotoxicity of the Money Tree on plant and animal models as a preliminary screening for the Money Tree’s anticancer potential. Halili and his colleagues found promising cytostatic and cytocidal effects of stem and leaf extracts from the Money Tree which indicate the plant as a potential source of a nature-based chemotherapeutic compound,” wrote Jonas P. Quilang, “Science Diliman” editor-in-chief.

“Proliferative Activities of Benguet Legume Cultivars on a Breast Epithelial Cell Line” evaluates the effects of extracts from six species of legumes on the growth of estrogen-responsive breast cancer cell line.

Insights from available data showed that more than half of the papers published are a result of collaborations with foreign institutions.  Publications in prestigious and high-impact journals are also slightly increasing.

“Insights on individual faculty productivity clearly show the shift from primary researcher to mentor between their sixth to 15thyear as a faculty member. This highlights the potential role of graduate student publications as yet another strategy to increase UP Science’s research output,” the authors wrote.

Meanwhile, the communication, “Health Risk Assessment: Total Mercury in Canned Tuna and in Yellowfin Tuna and Frigate Tuna Caught from Leyte Gulf and Philippine Sea” based on Arvin U. Pacoma’s research study, is an analysis on the total mercury content of the tunas caught in the waters of Eastern Visayas.

An estimate on the daily intake of locally-caught tuna and accompanying total mercury concentrations gave “values that are below the allowed concentration of mercury in fish consumed per day regardless of sex and age, suggesting there is no health risk to consumers.”

“For commercially-available canned tuna, the authors recommend that no more than one can per day should be consumed by adults, and children and pregnant women should consume less,” wrote Quilang.