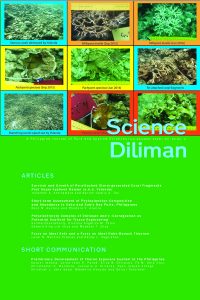 “Survival and Growth of Re-attached Storm-generated Coral Fragments Post Super-typhoon Haiyan (a.k.a. Yolanda)” by Jonathan A. Anticamara and Barron Cedric A. Tan discusses the re-attachment of 43 species of coral fragments to sturdy natural substrates in three sites in Eastern Samar damaged by super typhoon Haiyan. Results indicated that re-attachment of damaged corals greatly helps in the coral reef rehabilitation.

“Short-term Assessment of Phytoplankton Composition and Abundance in Cebu and Subic Bay Ports, Philippines” by Nero M. Austero and Rhodora V. Azanza is about a short-term study to evaluate the composition and abundance of marine diatoms and dinoflagellates (potentially harmful algae species) in two major ports in the country. The study established baseline data for the identification of potentially toxic harmful microalgae.

“Polyelectrolyte Complex of Chitosan and K-Carageenan as Potential Scaffold for Tissue Engineering” is about the fabrication of a stable and non-cytotoxic (non-damaging to cells) scaffold consisting of a polyelectrolyte complex of two biopolymers. The fabricated scaffold promotes cell growth. Soma Chakraborty, Kristina Angelica M. Yatco, Edward King Lim Chua and Modesto T. Chua wrote the article.

Science Diliman is an internationally refereed semi annual journal of pure and applied science. It is an awardee of the Journal Incubation Grant of the Commission on Higher Education. — Bino C. Gamba