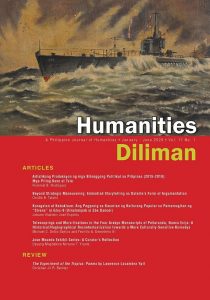 Editor-in-Chief Patrick F. Campos, PhD, said the latest issue focuses on the context of the current political dispensation in the Philippines which “has placed critical cultural expression under duress.”

“The cultural archive, or the repository of the zeitgeist recorded in daily expressions and interactions, is being manipulated to legitimize fascism and reorient history,” Campos said.

However, he said, “in the same context can be found disruptions of the fascist machination and expressions of resistance that constantly seek the archive’s reconfiguration.”

For the latest issue, Campos noted that the journal seeks to make a contribution to and serve as “evidence of the continuing effort in the university, in the area of academic research and publication, to hold the line and make certain that there is a yield of countercultural material available for the writing of the people’s history, now and beyond this present regime.”

“Artistikong Produksyon ng mga Bilanggong Pulitikal sa Pilipinas (2015-2018): Mga Piling Kaso at Tala” by Rommel B. Rodriguez is a study of the artistic and literary production of political prisoners in various parts of the Philippines both past and present.

“Beyond Strategic Maneuvering: Embodied Storytelling as Duterte’s Form of Argumentation” by Orville B. Tatcho focuses on the rhetorical analysis of President Rodrigo Duterte’s “performance in the televised presidential town hall debate of April 2016, co-hosted by television giant ABS-CBN.”

Tatcho notes in his abstract that “There is a need to study Duterte’s rhetoric in the debate to show which among his promises were fulfilled and abandoned.”

He said Espiritu offers a close-reading of the lyrics of “Sirena” as well as the visuals and narrative of its music video, “to analyze the discursive space occupied by kabaklaan in local music.  By drawing upon the work of J. Neil Garcia on the bakla and Dick Hebdige’s conception of subculture, Espiritu illustrates the ways the words of the pop song and their audiovisual iteration manifest a series of significations.”

“Telescopings and Moro-fications in the Four Arakyo Manuscripts of Peñaranda, Nueva Ecija: A Historical/ Hagiographical Recontextualization towards a More Culturally-Sensitive Komedya” by Michael C. Delos Santos and Feorillo A. Demeterio III focuses on four extant manuscripts of Arakyos or the localized versions of the komedya theatrical form.

The last article, “Jose Maceda Exhibit Series: A Curator’s Reflection” by Dayang Magdalena Nirvana T. Yraola “is an extended reflection on the Maceda exhibit series as a multifaceted project.”  In addition, “it touches upon the issues of archive and archival management, knowledge production through exhibitions, and the experimental repositioning of music in exhibiting platforms.”

Campos said “Apart from the unique appreciation the article offers on the work of the curator laboring at the intersection of art exhibition, music historiography, and ethnography, it also vivifies the role of the archivist and the importance of archival management in knowledge production and cultural preservation.”

“Humanities Diliman” is UP Diliman’s official internationally-refereed journal in the Arts and Humanities. It was awarded the Journal Challenge Grant through the Journal Incentive Program of the Commission on Higher Education.  It is a Scopus-indexed journal and is available via www.doaj.org and www.ebsco.com and has been listed in the ASEAN Citation Index at http://www.asean-cites.org/index.php?r=contents%2Findex&id=9.