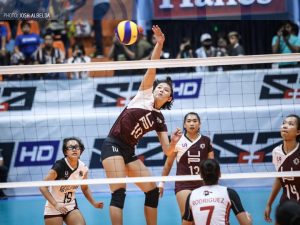 (FEB. 18)—The UP Women’s Volleyball Team started their University Athletic Association of the Philippines Season 81 with a hard-earned 5-set win against the University of the East (UE) Lady Warriors at the Fil Oil Flying V Arena in San Juan City on Feb. 16.

The Lady Maroons took the first set, 25-12. UE, however, fought back in the second and third frames to take a 2-1 match lead.

In the fourth set, the Lady Maroons erected an early lead, 10-1, against the Lady Warriors. UE staged a rally to cut the lead to two (14-16), but UP answered and staved off the Lady Warriors comeback for a 25-19 win to send the game in a deciding set.

In the deciding frame, Isabel Molde and Diana Carlos took charge as UP built a 13-9 lead before Jessma Ramos wrapped the game thru a strong swipe off UE’s block.

Molde paced UP with 23 points built on 19 kills, two blocks and two aces, while Carlos and Justine Dorog finished with 17 and 12 points, respectively. Ayel Estranero on the other hand delivered 44 excellent sets.

UP’s next game against the Far Eastern University is on Feb. 20, 4 p.m. at the Fil Oil Flying V Arena. — Bino Gamba, photo courtesy of Josh Albelda