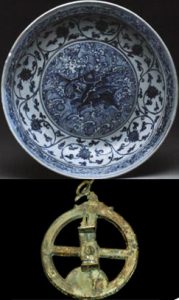 (AUG. 24) — Are collectors in the Philippines still allowed to own rare and unique pieces?  Yes, according to the paper “Ceramics make strange bedfellows: The contributions of the Oriental Ceramics Society of the Philippines to Philippine Archaeology.”

The research by archaeologist and UP Archaeological Studies Program (ASP) faculty Prof. Grace L. Barretto-Tesoro, PhD, cleared the misconception and fears of collectors over the matter.

PD 374 Section 7.c states “Designated National Cultural Treasures shall be marked, described and photographed by the National Museum.  The owner retains possession of the same but the Museum shall keep record containing such information as: name of article, owner, period, source, location, condition, description photograph, identifying marks, approximate value and other pertinent data.”

Meanwhile, Section 3.c of Presidential Decree No. 374 (PD 374), a National Cultural Treasure is “a unique object found locally, possessing outstanding historical, cultural, artistic and/or scientific value which is highly significant and important to this country and nation.”

She added the National Museum “respects the rights of the collector to own such pieces.”

Barretto-Tesoro cited the research of fellow ASP faculty and archaeologist Prof. Victor Paz, PhD. that showed “Purchasing and collecting antiques can therefore be viewed as a tactic to keep artifacts in the Philippines.”

Her research also observed the value of ceramics in better understanding Philippine and Asian history.

“The presence of large quantities of oriental ceramics in the Philippines prior to European contact in the 1500s indicate the Philippines’ role in the maritime trade networks of Southeast Asia,” Barretto-Tesoro said.  And “Ceramics can be used to investigate production and techniques in Mainland Southeast Asia and how these techniques evolved.”

Continuing further, she said, “Archaeologists should explore further why ceramics were acquired in the Philippines and what their appeal was to early Philippine societies.”

Barretto-Tesoro’s research is a review of seven publications of the Oriental Ceramics Society of the Philippines (OCSP) from 1987 to 2007.  OCSP is an organization of collectors and ceramic enthusiasts in the country formed in 1980.  She said the organization’s publications were used by archaeologists in general as “manuals to identify and date foreign ceramics recovered from excavations.”