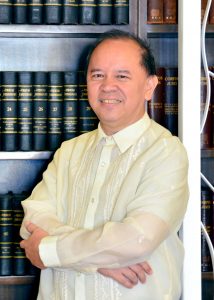 The Metrobank Foundation Outstanding Filipinos is the most prestigious career-service award in the academe, military and police sectors that recognizes a Filipino’s “service above and beyond the call of duty.”

Jose is Professor 12 at the College of Social Sciences and Philosophy Department of History where he has been a faculty for 37 years. His many researches have been published in various peer-reviewed and refereed journals. At the 70th anniversary celebration of UP Diliman (UPD) that coincided with the campus’ annual Arts and Culture Month last February, Jose was tapped as Archival Research Head and curator of the exhibit “Lupang Hinirang: Mga Kuwento ng Pagsasalugar ng UP Diliman.” He was among the six scholars that reflected on the events prior to UP’s exodus from Manila to Diliman and UPD 70 years hence.

Each of the 10 will receive a P1 million cash prize, a gold medallion and a trophy at Metrobank’s 57th anniversary celebration in September. – Mariamme D. Jadloc, image by Jefferson Villacruz