(Jan.22)—The UP Institute of Environmental Science and Meteorology (IESM) is still a World Meteorological Organization-Regional Training Centre (WMO-RTC) after its reconfirmation on Dec. 19. 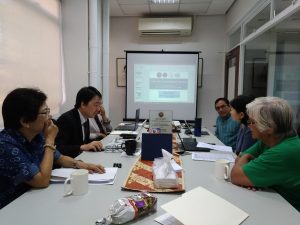 WMO is a specialized agency of the United Nations (UN) with 192 member states and territories. It is the “UN system’s authoritative voice on the state and behavior of the Earth’s atmosphere, its interaction with the land and oceans, the weather and climate it produces and the resulting distribution of water resources.”

The external review for the reconfirmation was conducted at the IESM from Dec. 17 to 19. The reviewers were Hong Fan, Fellowship Officer, WMO Education and Training Office; Dr. Amelia A. Dorosan, Vice President for Administration and Finance, Bicol University; and Ryuji Yamada, Programme Manager, WMO Regional Office for Asia and the Southwest Pacific, Development and Regional Activities Department.

The reviewers met with professors and students of IESM Meteorology program, and toured and observed the Institute’s laboratories. In each laboratory, the personnel discussed their previous and current projects and researches.

IESM director Lemuel Aragones said the reconfirmation is an acknowledgement of the UP IESM’s great works in meteorology. IESM is the sole Philippine institution that offers a Meteorology graduate program. Its curriculum is based on the WMO guidelines.

As a WMO-RTC, UP IESM undertakes training in meteorology, hydrology and related sciences to meet the needs of the countries in the Regional Association V or the South-West Pacific Region, including the adjacent areas north of the equator and the eastern parts of the Indian Ocean. This undertaking increases the Institute’s prominence and visibility in the global arena, attracting international students from WMO member countries.  — Bino C. Gamba, photos from UPIESM