(Oct. 21) — The Likhaan: UP Institute of Creative Writing and UP Press held the seventh installment of the Interdisciplinary Book Forum (IBF) on Oct. 17 at the CAL AVR (PH1209-1210), Pavilion 1, Palma Hall. 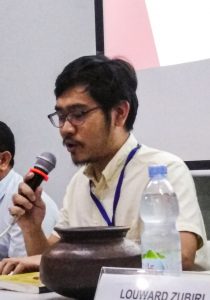 The IBF was established in 2016. Held once every semester, it seeks to provide an academic venue in which to realize the imperative for dialogue and intellectual engagement across the various disciplines in the university.

The book-in-focus for this iteration was 3 Baybayin Studies (2017) by Ramon Guillermo, Myfel Joseph D. Paluga, Maricor Soriano, and Vernon Totanes.

Lopez stated in his review that the book is both bold and cautious. The careful disclaimers in the book does not claim to be the correct findings on Baybayin. 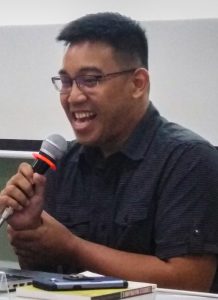 Lopez also agreed with Guillermo in the importance of punctuation marks like the ‘danda,’ composed of two vertical lines, which gives a glimpse into an uncharted part of the country’s maritime history.

The second discussant, Zubiri, noted the differences in the use of the terms ‘Surat’ and ‘Baybayin’ in the book.

Surat connects to other indigenous scripts in Southeast Asia while Baybayin is purely Filipino.

Baybayin is also the pre-colonial script, predominantly used by Tagalog speaking communities, extending to the Visayans and other parts of the country. It is the script identified as Tglg 370 in the ISO 15924, which is the international standard for the representation of names of scripts.

Third discussant, Rodriguez, said that discovering a mystery is similar to studying Baybayin.

“It’s like a legend that will not disappear from our collective awareness,” said Rodriguez in Tagalog. He said Baybayin serves as a cultural lens to our history, which is hard to come back to currently. 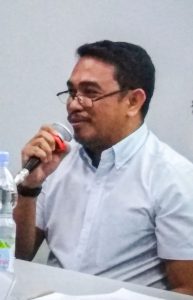 Fourth and final discussant, Paz, provided archaeological materials related to Baybayin such as replicas of the Laguna Copperplate and the Calatagan pot.

He talked about the book’s political epilogue relating to the presence of the ‘Ka’ character in the Katipunan’s flag. He talked about his opinion here, where the Baybayin script never disappeared from the collective mind of the Tagalogs.

Paz also talked about the importance of epigraphic and paleographic studies, since ancient scripts can confirm if artifacts and relics are fakery or not.

He also gave praise to the book for its interdisciplinary content and scholarly approach on the topic of the ancient script to conclude his part of the discussion. 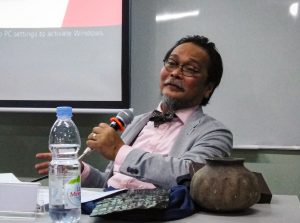 “It is well written and is a good example of interdisciplinary research and collaboration, and it is a good cornerstone as my colleagues mentioned,” Paz said. “It is not an attempt to convince you  that this is it, in terms of meaning, it’s an attempt to argue that there is a rigor in epigraphy in trying to understand that we can all make as a baseline.”

For interested parties, 3 Baybayin Studies is available at the main office of the UP Press or at UPper Shelf, its bookstore branch at the UP Town Center. — images and text by Ezekiel Dionisio and Aldric de Ocampo