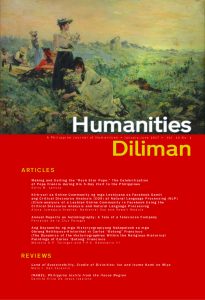 The UP Diliman’s (UPD) official internationally-refereed journal in the Arts and Humanities has four articles and two exhibition reviews.

The articles are:  “The Celebritization of Pope Francis during His Five-Day Visit to the Philippines” by Gerry M. Lanuza of UPD; “Click-analysis of a Lesbian Online Community in Facebook Using the Critical Discourse Analysis and Natural Language Processing” by researchers Alona Jumaquio-Ardales of De La Salle University (DLSU) Science and Technology Complex, Nathaniel Oco of National University and Rowell Madula of DLSU; “Annual Reports as Autobiography: A Tale of a Television Company” by Fernando de la Cruz Paragas; “The Dynamics of the Historiographies within the Religious-Historical Paintings of Carlos “Botong” Francisco” by Melanie D.P. Turingan of the University of Santo Tomas and F.P.A. Demetrio III of DLSU; “Land of Sustainability, Cradle of Divinities: Ise and Izumo Kami no Miya” by Marc J. San Valentin of UPD, and “INABEL: Philippine Textile from the Ilocos Region” by Carmita Eliza de Jesus Icasiano of State University of New York at Binghamton.

The late Dr. Reuben Ramas Cañete, the journal’s editor-in-chief, said the authors explore “articles that outline the extent by which mediatization structures our daily cultural experiences as audiences and participants, and show how publics react to certain ‘representations of culture’ as presented by the media.”

Lanuza’s paper attempts to provide an analysis of the “celebritization” and “celebrification” of Pope Francis when he visited the Philippines from Jan. 15 to 19, 2015.

Cañete said Lanuza, who utilized the critical theories of Frankfurt School, argues that “this ‘celebritization’ process creates a (false) spectacle of the representation of the Holy Roman Catholic Pontiff that is often at odds with the message of simplicity, humility, and selflessness that Pope Francis himself advocates.”

Researchers Ardales, Oco and Madula chose the organization of a lesbian community or LESCOM as subject of the study which aims “to describe the discourse on the online community of lesbians in the Philippines.”

The editor notes that “Social media’s need to encourage massive numbers of interactive users to participate and immerse in interest-driven themes and agendas serve to create virtual communities were otherwise suppressed identities and voices can find ‘a room of one’s own’ as Virginia Woolf once wrote.” Such is the case of the three researchers’ online study which “looks at how ‘Filipino lesbian-ness’ is accepted and encouraged in the ‘glocal’ world of social media through the number of ‘likes’ the group’s page receives.”

Meanwhile, Paragas used annual reports (AR) of ABS-CBN, the biggest media conglomerate in the Philippines, between 1996 and 2010 as a case study for his paper and applied Norman Fairclough’s Critical Discourse Analysis framework to analyze the ARs.

At the heart of mediatization’s own constituent identity is the idea “personhood and “personality.” The editor inquired, “If individuals with specific gender, ethnic, linguistic, or occupational markers are allowed online existences that then branch out into interactive networks, what about those media companies who must distinguish from each other’s identities for marketing and representational reasons?”

According to Cañete, Paragas’s study “focuses on a narrower version of this ‘corporate personality’ by tracing how the company represents itself to its ownership and public through the methods, narratives, and agendas explicated by the AR.”

Turingan and Demetrio, in their paper examine four religious historical works of National Artist for Painting Carlos “Botong” Francisco and the hidden tensions between Hegelian and orientalist historiographies and postcolonial historiography. These works are “The Introduction of Christianity in the Philippines (1965), the first two panels of Progress of Medicine (1953), First Mass in the Philippines (1965), and Introduction of the First Christian Image (1965).

This  reaffirms the “contention of mediatization’s hold of the popular imagination to famous imagery, where canonical works of art are subject to endless debates of meaning and relevance by experts as viewed by global audiences, while the status of the artwork as ‘venerated’ or ‘celebritized’ object remains unquestioned,” according to Cañete.

San Valentin’s exhibition review on Japanese photographers Ise and Izumo Kami no Miya “follows the exacting process of media production of the artist’s lush medium of printing large-format photographs into traditional washi paper; as well as his focus on two themes that have defined the artist’s relationship with art and culture, his initial training in France, and his return and rejuvenation in Japan,” Cañete notes.

For Icasiano’s review, Cañete said reaffirmation of cultural roots took the form of the exhibition “Inabel” (2015), which for the New York-based author “presented a dignified rendering of a traditional artisanal practice, with a distinctly forward-looking approach to heritage that bolsters a hope to save the weaving practice from oblivion.”

Cañete was appointed as Humanities Diliman’s editor-in-chief in 2015. He previously served as one of its associate editors from 2012-2014. He passed away on Feb. 17 at the age of 50.