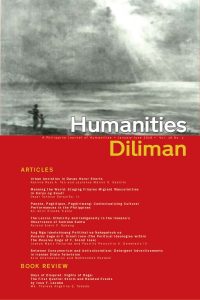 (MAY 30)—The Humanities Diliman January to June 2019 issue (HD Vol. 16 No. 1) featuring six articles and a book review is now available online.

Prof. Patrick F. Campos, PhD, HD’s editor-in-chief, said the latest issue emphasized on the concept of paglulugar (place-ing) which has “grown in importance in various approaches to cultural, literary, performance and media studies since the 1980s and in certain fields have already reached moments of rupture and transformation.”

He said “One may think of the articles contained in this issue of ‘Humanities Diliman’ as instances of the ongoing developments and contestations in spatial, postcolonial, cosmopolitan, regional and local scholarship.”

Tan and Castillo’s article focuses on short films from the growing film industry in Davao City in Mindanao. According to the authors, their essay examines how the horror films produced by the independent filmmakers function “as imaginative mediations of urban anxieties in the region.”

Campos noted that the essay “reads meanings of place in selected films but also situates the contributions of these films in the production of a ‘regional cinema’ that offers an alternative view of national cinema.”

Serquiña’s article revisits and analyzes the “melodramatic form” of the 1987 play by the Philippine Educational Theater Association (PETA) “Katas ng Saudi.” This features four Filipino construction workers during the height of the oil-fueled construction industries in the Persian Gulf.

Campos said the paper argues that “labor migration and the vicissitudes of diasporic living transform the meanings of masculinity and its vaunted relationship to nation-building.”

Tiatco’s paper is about his field notes and personal experiences written while researching on performances in various parts of the country. Based on the author’s abstract, the article “reflects on the concept of cultural performance in a preliminary attempt to historicize and to contextualize it using Philippine culture as a starting point.”

Campos said the paper argues that “public performances are enacted as artistic expressions in small-group situations, but the motivations of the performers and participants are at bottom personal devotion.

Rabang’s article focuses on the leccio, “a form of lamentation by Mary, the mother of Jesus based on the suffering and death by crucifixion of Jesus Christ.”

Campos said the author closely compares the pasyon and the leccio and “shows how groundedness in local tradition renders the expression and meaning of these two cultural-religious forms differently.”

Meanwhile, Demetrio and Felicilda aims to describe the political ideas found in Jose’s well-known quintet novels, ‘The Pretenders’; ‘My Brother My Executioner’; ‘Tree’; ‘Mass’ and ‘Poon’ and uses political categories inspired by the work of Hans Slomp, a German theorist.

In the last article, authors Ghandeharion and Rostami, as stated in their abstract, traces 532 detergent advertisements broadcast by Iranian State Television from 2011 to 2015 and how these “exploit Western or Western-like names and words as a synthesis of Western influence and Iran’s anti-colonial discourse in post-revolutionary era (i.e. the Islamic Revolution of 1979).”

“Humanities Diliman” is UP Diliman’s (UPD) official internationally-refereed journal in the Arts and Humanities. It is an awardee of the Journal Challenge Grant through the Journal Incentive Program of the Commission on Higher Education. It is also a Scopus-indexed journal and is available via www.doaj.org and www.ebsco.com and has been listed in the ASEAN Citation Index at http://www.asean-cites.org/index.php?r=contents%2Findex&id=9.