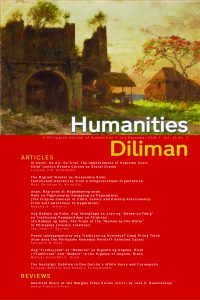 Crisostomo’s paper looks at the impeachment of Renato C. Corona, former Chief Justice of the Supreme Court of the Philippines, through the lens of Victor Turner’s Social Drama Theory. According to Prof. Patrick F. Campos, PhD, HD’s editor-in-chief, Crisostomo’s article “is an appraisal of the impeachment of Supreme Courts Chief Justice Corona as a social drama performed in the space where governmental politics, the law and mass media intersect.”

Moratilla’s article analyzes letters written by overseas Filipino workers (OFWs) through a two-pronged concept of resistance—one that fuses the discourse of critique with that of affirmation. Campos said the essay’s use of testimonies “seek to orient the narrative way from a romantic view of OFW life and toward a realistic one.”

Javier analyzes the words anak/c (the child), mag-anak (the family) and magkakamaganak/an (kinship relationship) using techniques in psycholinguistics. The editor notes that Javier’s article explicates the shifting Filipino notion of anak in a cultural economy that gives high premium to the value of utang na loob; traces the concepts of child, family and kinship and their movement in meaning from self-awareness to separation, and demonstrates the continued centrality of anak in modern Filipino psychology.

Quintos’s essay focuses on the image of the “woman-by-the-water” which has always been a recurring motif in Philippine epics and folk narratives. The author said folk tales about this discursive image were wrought by the different colors and shapes of colonization.

Meanwhile, Campos said it is worth noting that essays of Javier, Moratilla and Quintos “may be productively read together and appreciated for how they evaluate the crucial place of the woman in culture, literature, and society.”

Chua’s paper, on the other hand, “is structured differently,” says Campos. It focuses on komedya’s staying power in the Philippine theater. The author cited three cases that show komedya arts as being subjected to changes by various theater group agents.

Giron studies the higante-making practice of Angono, Rizal where the art form is one of the town’s prominent traditions. Campos said the author notes the formal changes that have been introduced to the designs of the giant human figures paraded during the festival that have been visible correspondences to history and current events.

In the last essay, authors Behrooz and Pirnajmuddin focus on Don DeLillo, known as a great postmodernist writer. The authors note that “because of his nostalgia for transcendence and “lost assurances,” he has become associated with modernism as well” and such was articulated in two of DeLillo’s novels.

Humanities Diliman is an awardee of the Journal Challenge Grant through the Journal Incentive Program of the Commission on Higher Education. It is also a Scopus-indexed journal and is available via www.doaj.org and www.ebsco.com and has been listed in the ASEAN Citation Index at http://www.asean-cites.org/index.php?r=contents%2Findex&id=9.