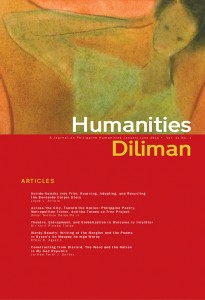 The year’s first issue of the semi-annual journal on Philippine humanities features five articles about “the conceptual relationship of words in the world and the significances and meanings that motivate that link,” issue editor Jose S. Buenconsejo writes in the Editor’s note.

Buenconsejo said the meanings of the words in the articles “are not abstract but completely social in nature as the articles force us to see the complexity of the word-world-meaning nexus evident in the various performative Filipino expressions carefully explored by the authors of the issue.”

He further hopes the readers are encouraged to reflect on the “dialectic between texts and social worlds and the meanings that mediate them both.”

The five articles are “Korido-Komiks into Film: Sourcing, Adapting, and Recycling the Bernardo Carpio Story” by Joyce L. Arriola; “Across the City, Toward the Nation: Philippine Poetry, Metropolitan Trains, and the ‘Tulaan sa Tren’ Project” by Oscar Tantoco Serquiña Jr.; “Theatre, Entrapment, and Globalization in ‘Welcome to IntelStar’ by Sir Anril Pineda Tiatco; “Wáray Beauty: Writing at the Margins and the Poems in Oyzon’s ‘An Maupay ha mga Waray’” by Efmer E. Agustin; and “Construction from Discord: The Word and the Nation in ‘My Sad Republic’ by Jaimee Faith J. Santos.

Arriola’s work is about the “recycling” of the Bernardo Carpio narrative across time “from the Filipino ‘awit/korido’ to its incarnation in the early 20th century into prose and ‘komiks’ serial.  The author argues that the borrowing of the Bernardo Carpio story has been inflected with local Filipino sensibility evolving to a “genre that conformed to the characteristics of the indigenous epic narrative.”

Serquiña’s article is on the search for a defining subjectivity in the world through words.  He assessed the state-initiated poetry project ‘Tulaan sa Tren’ implemented in Manila’s Light Railway Train cabins and stations.

Serquiña “did not critique the project in a simplistic either/or manner but subtly weaved a dense account that foregrounds the uniqueness of sensing a Metro Manila train ride,” Buenconsejo said in the editor’s note.

Meanwhile, Tiatco’s article examines words in theater as fictionalized world through his reception and analysis of the Chris Martinez 2006 monodrama “Welcome to IntelStar,” a satire on the use of global English and how it hastens the “effacement of local identity.”

The article tackles the author’s discovery of himself being seduced by the play’s message, “shedding light to the reversal in positions where the theater experience itself is a kind of trap, consequently undoing the author’s negative attitude towards globalization,” according to Buenconsejo.

Buenconsejo said Tiatco “reflexively situates his position by problematizing the anti-globalization rhetoric to talk about the indeterminacy of ‘reality’ and ‘illusion’ in a theater experience.  It is in this moment that one turns cynical: all words in the worlds are seemingly half-truths.”

Agustin on the other hand, talks about the “linguistic hierarchicalization” between what are considered works of Philippine national literature propagated from Manila and its subaltern, the Eastern Visayan “regional” literature, particularly the Waray-waray language.

Agustin’s review of Voltaire Q. Oyzon’s book “An Maupay ha mga Waray” counters National Artist for Literature Bienvenido Lumbera’s claim that regional “dialects” like the Waray-waray have no semantic depth and richness of expression.  Agustin contends that the “valuation of the worth of regional languages by national authorities is a form of internal colonialism that should be resisted.”

Buenconsejo said Santos’s interpretation of the novel shows the difficulty of speaking of and for the Filipino nation.  “In short, the author highlights the struggle for leadership in the country, taking this as indicative of the problem of voicing the word of the nation.  Thus, in this essay, we appreciate how much power…gives meaning to social relations.”

“Humanities Diliman” is a publication by UP Diliman through the Office of the Vice Chancellor for Research and Development.  It earned in January the Category A-1 accreditation of the Commission on Higher Education (CHED) subsequent to its indexing in Scopus 2012.  Category A journals receive from CHED a yearly incentive of P200,000 and an endorsement for library subscription.—Cover photo courtesy of OVCRD