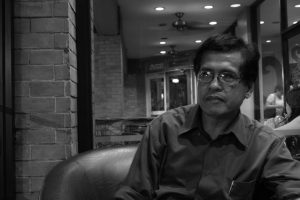 (MAY 9)—Prof. Cesar Hernando, retired Associate Professor V from the UP College of Fine Arts (UPCFA), passed away on May 8 at the Cardinal Santos Medical Center in San Juan, according to his family’s post on Facebook. He was 72.

He served as faculty on Jun. 1, 1986. After his retirement in 2011, he continued teaching at the UPCFA as a professorial lecturer under the Department of Visual Communication.

According to the Facebook post of Hernando’s nephew, Raymundo, “Mass for Tito Cesar Hernando will be held today, 4 pm, at Funeraria Paz (Araneta Ave). After the mass, his remains will be cremated, 5 pm, and will be available for viewing around 7 pm at Paz (Annex Bldg – 3rd floor – Chapel 11) until Saturday morning. Inurment will be on Saturday.” —Haidee C. Pineda