(MAR. 20) — “We are here not to train, we are here to educate.”  This was said by UP Diliman (UPD) Chancellor Michael L. Tan at the international symposium, “Recalibrating Compasses: Global and Local Knowledge Production Today” on Mar. 6 at the Benitez Hall Auditorium. 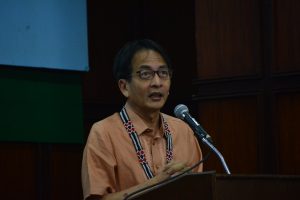 Speaking before international social scientists and members of the university academe, Tan underscored the University’s role as educator while addressing the issue of performance indicators and ranking.  Performance indicators are used for institutional evaluation and what the Chancellor called “as pressures UP face from legislature and public officials who ask if the university is still on the top rank.”

“I’m afraid that these performance indicators have reduced our roles to training, a term that I have pointed out as a veterinarian, is best used for circus animals,” the Chancellor said.

Institutional evaluation is one disadvantage of free tuition, Tan said, “because we are at the mercy of public officials today, especially in budget.”  He noted that it gets tiring, “but of course these are the officials who hold the purse.”

The Chancellor observed that an adverse impact of performance indicators is the faculty inflating their achievements to get more points.  He has seen it in applications for professorial chairs.

“Everyone is so obsessed with points that they forget the heart for knowledge production,” Tan lamented.  Even so, he assured that UPD still upholds its tradition of nurturing critical and discerning minds. 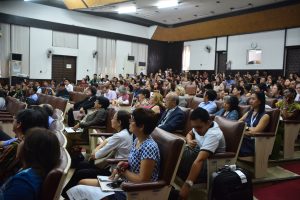 Tying the concern of knowledge production to the symposium’s topic, the Chancellor said there is a need to deconstruct the production of knowledge across disciplines.  He himself deconstructs knowledge in his practice as a medical anthropologist, “challenging my medical phenomena to show that they are also of the social construct.”

Tan said compasses can be recalibrated.  Using the traditional Chinese compass as an example, he said this points to the south in accordance with China’s ancient southern tradition.  As such he revealed the choice of the north is a social one.

In closing, he enjoined the social scientists present to take the lead in reminding people that the compasses that guide each ones’ endeavor need not privilege the north.

“Look as the ancient Chinese to the five directions.  There’s the north, the south, the east, the west, and there is the center.  It is not surprising that the center corresponds to our hearts.”

The symposium was a presentation of the International Sociological Association in collaboration with the Philippine Sociological Society and the UP Department of Sociology of the College of Social Sciences and Philosophy. — Mariamme D. Jadloc, images by Leonardo A. Reyes