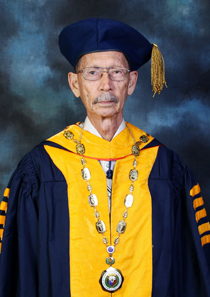 Gomez was conferred the rank of National Scientist in 2014 “for his outstanding
contributions to science particularly his research on marine ecosystems which became the
bases for management of and the conservation programs for the country’s marine
resources.”

He was known for his notable researches in coral reef ecology and restoration,
conservation of marine resources, reproduction of marine invertebrates and culture of
giant clams.

A founding director of the internationally acclaimed The UP Marine Science Institute from
July 1974 to April 1999, Gomez was conferred the University Professor Emeritus in 2005.

He received numerous awards as an expert in the field of marine science. Among his
prestigious awards were the Global 500 Roll of Honour by the United Nation’s Environment
Programme in 1989; the Pew Marine Conservation Fellow in 2001; the Presidential
Lingkod Bayan Award by the Philippine Civil Service Commission in 2000; and The
Outstanding Filipino (TOFIL) Award in Science in 1992. In 1993, he was elected
Academician by the National Academy of Science and Technology (NAST) Philippines.