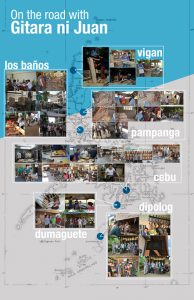 A team of faculty members, engineers and musicians from UP Diliman combined art, engineering and science to create a quality classical guitar for Juan Dela Cruz and which may hopefully revive the declining industry of guitar-making in the Philippines.

Gitara ni Juan (GnJ) project. The UP College of Music (CMu), in collaboration with the College of Engineering Electrical and Electronics Engineering Institute (COE-EEEI) started the 18-month project “Gitara ni Juan: Development of prototype design and standardization of the guitar-making process for quality classical guitars using select Philippine woods,” in December 2014 to “establish a standard for the entry-level classical guitar-making process in the country.”

With more than 3,000 species of Philippine woods, the GnJ project also sought to explore and promote the use of locally available woods as alternatives “by incorporating them into guitar prototypes.”

According to the project team, “most high-quality guitars available in the market use imported solid woods such as spruce, cedar, or rosewood.”

The project was funded by Philippine Council for Industry, Energy, and Emerging Technology Research and Development of the Department of Science and Technology (DOST-PCIEERD).

Prof. Nathan Manimtim, current CMu Department of Strings and Chamber Music chair, is the project leader and the two other proponents are COE instructors Crisron Rudolf Lucas of EEEI and Jon Dewitt Dalisay of the Department of Mechanical Engineering (DME).

In an interview with UPDate, Manimtim said it was the first time that the college collaborated with two COE  departments  and handled a project funded by the DOST-PCIEERD.

He said the project was a result of the talks in 2013 between CMu Dean Buenconsejo and Dr. Rowena Guevara, DOST Undersecretary and former COE dean, about a multidisciplinary project on instrument making. 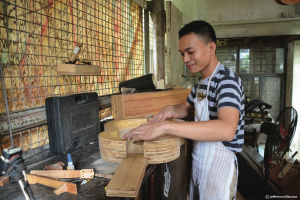 The making of Gitara ni Juan. With a budget of almost P5 million, the team visited guitar making sites in the Philippines for the first phase of the project and met most of the luthiers (stringed instrument makers).

Lucas, who is an expert in digital signal processing, said the team worked on finding the inconsistent qualities in locally-made entry-level guitars and plans to recommend to the backyard luthiers the standard process of and the use of local woods in making guitars.

He said the use of local woods in making instruments was based on the previous research of Carandang in the late ‘80s.

During the team’s data gathering in Dumaguete City, they met William and his brother Jayson Alama and requested them to be the official project luthiers.

William is a 27-year-old guitar maker from Dauin, Dumaguete City, Negros Oriental. He learned the skill of making instruments from his late grandfather who was a known luthier in their province. When better-built imported guitars became a popular choice among Filipino musicians, the market for Philippine-made guitars considerably declined, forcing most guitar makers to shift to more sustainable jobs in order to survive.

Through the help of his brother, William created the 12 prototype guitars based on the “recipe” given by the team.

Dalisay, who teaches mechanical engineering subjects at the COE, said these prototypes were made from different combinations of wood. He said there are two general classifications of wood used in guitar parts: soft and hard. 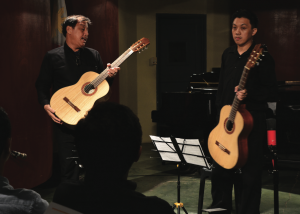 Dalisay said specific woods were used for the soft and hard wood parts of the prototype guitars. The team also replicated the prototypes to test the variability between two guitars with the same combination of wood.

The team also explored many methodologies throughout the course of the project; in particular, they used X-ray on the musical instruments with the help of doctors at the National Kidney and Transplant Institute. The team said “Though it is already an established methodology abroad, it is the first time that it was intensively applied in the Philippines.”

The team said “This project also opened up a new approach in signal analysis done in UP Diliman, where subjective evaluations from human sound perception tests are linked to quantifiable audio features and properties which are then linked to material properties and modal vibration models.”

At the GnJ’s official launch at the CMu Mini Hall on May 12, one of the prototype entry-level guitars was played by Prof. Lester Demetillo, an esteemed classic guitarist in the Philippines. 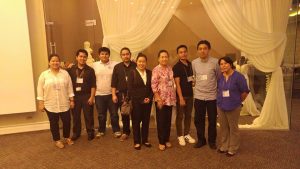 Updates on the project. This year, the project is technically finished and the team is currently preparing its final output.

Lucas said the next step is to make a compendium (manual).

According to Manimtim, the team is planning to propose a project that will upgrade the prototype entry-level guitars into recital or concert-level guitars.

Manimtim also said UP allocated funds to CMu for the construction of a new building that will be “designated as an instrument making room. I think the dean is also planning to have this program. Siguro magsisimula sa extension program na we will be offering this instrument making non-credit courses. Baka tayo (ang UP Diliman) ang mauna. Sana.”

From the data gathered, the team also discovered that most guitar makers in the country already shifted to another job.

Through the GnJ project, the team members are hoping to help local luthiers like William to revive the industry and produce high quality guitars at par with its foreign counterparts.

It was also presented at the DOST-PCIEERD’s 6th anniversary in Clark, Pampanga on Jun. 29 where four of the 12 prototypes were presented and played during the event. The team also conducted a “Guitar Making Clinic” attended by guitar makers from Pampanga, Cebu, Dumaguete and Dipolog.—with photos from the GnJ project team