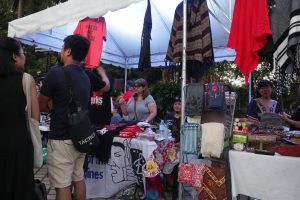 (MAR. 4)—Sunday evenings at the UP Carillon Plaza are usually quiet, with only the sound of the nocturnal wildlife and the rhythmic thump of joggers’ feet pounding the pavement to be heard.

However on Feb. 22 the sounds of music from the First Quarter Storm (FQS) filled the space for the annual Himigsikan concert. FQS was a period of civil unrest during the first quarter of 1970 involving protest actions against the abuses during former president Ferdinand Marcos’ administration.

The aura in the air was not unlike a music festival, with the pathway lined with booths selling trinkets, jewelry, clothing and other merchandise leading to a brightly lit stage set up in front of the Carillon Tower serving as the center piece of the festivities. 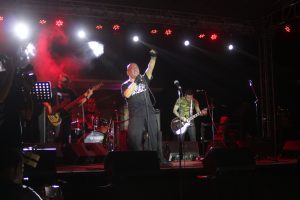 The small crowd gathered at the start of the show grew larger as the night wore on, eventually spilling over into the sides of the stage, enthusiastically clapping, singing and cheering at every performance.

The event also served as the launching event of “Unang Sigwa: Mga Piling Kanta mula Dekada Sitenta,” a collection of songs from the FQS recorded with new, contemporary arrangements. 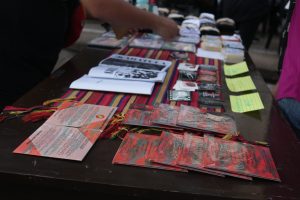 The 12-track album was produced by the FQS Movement, FQS@50 and the Surian ng Sining Institute in cooperation with the Tag-ani Performing Arts Society and Concerned Artists of the Philippines (CAP).

In between performances, Jesus “Koyang Jess” Santiago and Bonifacio Ilagan served as masters of ceremonies, introducing the artists and providing context for members of the audience unfamiliar with their body of work. 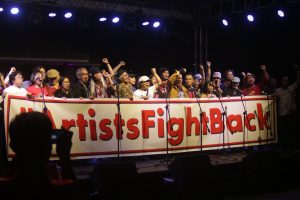 Himigsikan 2020 is part of the UP Diliman Arts and Culture Festival 2020: Makita kang Sakdal Laya, a 4-month series of events that celebrates the 50th anniversary of the FQS.—Anna Regidor, images by Isha Bonus