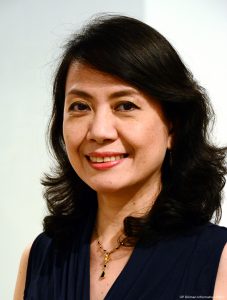 The UP Board of Regents approved Aguilar-Reyes’s appointment at its 1344th meeting on Apr. 29 and will serve as dean until Apr. 28, 2022.

Aguilar-Reyes earned both her Bachelor of Fine Arts major in Visual Communication and Master of Arts in History in UP in 1983 and 1994, respectively.

A professor at the Department of Visual Communication (DVC), she has been with the University for more than three decades and was DVC chair from 2005 to 2010.

Appointed by Chancellor Michael L. Tan as UFS officer-in-charge in 2015, she later became its director and served until May 2019.

Aguilar-Reyes’s research on “The Patadyong: A Colorful Weaving Tradition of Miag-ao, Iloilo” included in the book “HABI, A Journey Through Philippine Handwoven Textiles,” published in 2013 by The Philippine Textile Council.

She co-authored “Garment of Honor, Garment of Identity,” a comprehensive research on the barong Tagalog published by the Barong Filipino Foundation, Inc. in 2008.

She is one of the founding members of the “Ang Ilustrador ng Kabataan” (Ang I.N.K.) and was also one of the illustrators of the “Ang INKredible Coloring Book for Big and Small People” published by Anvil Publishing, Inc. in 2016.

Aguilar-Reyes is a painter, printmaker and potter. She had solo exhibits and has participated in several art exhibits, both local and international.

Aguilar-Reyes is a Gawad Manlilikha ng Bayan committee member for the National Living Treasure Award of the National Commission on Culture and the Arts; a Philippine Center for Gifted Education, Inc. advisory board member, and UP Delta Lambda Sigma Sorority faculty adviser. —Haidee C. Pineda, image by UPDIO