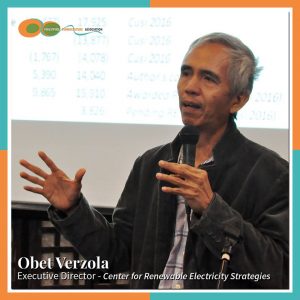 (MAY 8) — Father of Philippine email Roberto “Obet” Verzola passed away on May 6 due to a lingering illness. He was 67.

An electrical engineer, Verzola was a former lecturer at the UP Diliman Institute of Mathematics (2009-2017).

In 1992, he set up email and internet connections for non-government organizations in the Philippines like the Philippine Greens, where he served as Secretary-General, Tanggol Kalikasan, Center for Renewable Energy, Sustainable Technologies, and Systems for Rice Technologies.

Verzola is known for his detailed analysis of the 2004 presidential and 2007 senatorial elections, both of which he disclosed as having had massive cheating.  He was the author of “Crossing Over: The Energy Transition to Renewable Electricity” (2015) and the “Towards a Political Economy of Information” (2004).

In 2003, Verzola staged a month-long hunger strike at the front gates of the Department of Agriculture (DA) in defiance to DA’s introduction of Bt corn, a genetically modified crop. Verzola was an advocate of organic farming.