Students and professors from three Philippine universities participated in the week-long in-depth Winter Camp in China from Dec. 7-14, 2016 hosted by the Embassy of the People’s Republic of China to the Philippines.

“Through the camp, we aim to promote understanding and collaboration among people,” said Shen Xuesong, China Education Association for International Exchange (CEAIE) Deputy Secretary General, during the banquet for the Filipino delegates. The camp is an initiative by Zhao Jianhua, Chinese Ambassador to the Philippines, in partnership with the CEAIE and the Chinese Ministry of Education.

“I am confident that this would be a great opportunity to further enhance our amicable ties,” Ambassador Zhao said in the invitation.

Dr. Lourdes M. Portus, professor of communication at UPD and special assistant to the UP President, said “We also met with some university officials. The meetings and exchanges between our students are so valuable and we think these are the highlights of the winter camp.  The camp is one of the most important aspects of the academic lives of the students,” during a speech delivered at XISU.

Portus added “Our students may become future leaders of our countries. And I think this exchange will really be a contributory factor on how they will lead and will always remember China as an inspiring country.”

The all-expense-paid trip was a great opportunity to know China from a different perspective, Prof. Ma. Merlie R. Arbo, BU’s team leader and Dean of Office of Students Services, said.

“There’s nothing wrong having diplomatic ties with them. But that doesn’t mean that we have to stop standing for our rights. Although we have issues, the only remedy is for us to talk,” Arbo said. She added that BU looks forward to the Chinese embassy offering scholarships to its students and providing them a chance to participate in similar initiatives.  Only UP and BU students enjoy the Chinese ambassador’s scholarship program to date. 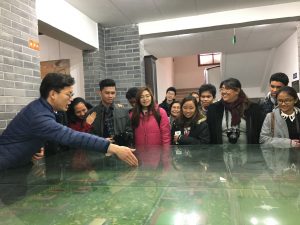 The Philippine delegation tour at the Xi’an Jiaotong University

CEAIE is likewise grateful for the chance to strengthen relations between Chinese and Philippine schools, said Shen.

“We’re very happy to see that bilateral relations between China and the Philippines are good. We also believe that the young people are the future not only of our countries but of the world,” Shen added.

Meanwhile, for Arianne Agustin, a senior public administration student from UPD, the trip made her understand and know more about China.

Mirriam Badilla, an education major from PNU, said the camp broadened her ideas on China.

“We are Asians, we may be diverse in some ways, but we are almost the same. Therefore, we are very glad that we are establishing a strong cooperation in academic and also cultural aspects,” Portus said. “The scenic places we visited are all windows of the heart and soul of China. All of the people we met are all epitomes of success that we may want to emulate.”