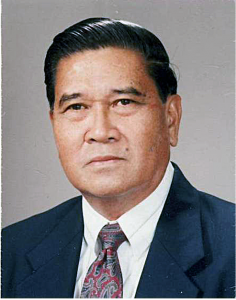 (JUN. 20)—The UP Diliman (UPD) community is one with the family of former UPD Chancellor Ernesto G. Tabujara, who passed away this morning at the Philippine Heart Center in Quezon City. He was 85.

In an interview with UPDate, his lawyer son Ernesto Tabujara Jr. said his father died at 7 a.m. this morning of heart failure caused by multiple organ failure.

According to the Beta Epsilon website, Tabujara was a career professor who provided exemplary service to the University in his seven years as UPD’s first Chancellor (1983-1990), steering the University through the aftermath of the EDSA Revolution and towards the end of the 20th century.

It was also through his initiative that the programs of UP Clark and San Fernando, UP Baguio, UP Visayas and UP Mindanao were established.

WikiPilipinas states that Tabujara was a respected structural engineer, noted for his pioneering work in the formulation of research-based design criteria and methodologies for earthquake-resistant and extreme-wind-resistant structures and the use of indigenous construction materials and low-cost housing technology. He played a role in the development of the national structural code of the Philippines.

Among the structures he designed are landmarks like the Philippine International Convention Center, the Batasang Pambansa Complex, the Philippine Coconut Authority Building, the Telecom Plaza Building and the New World Hotel.

He earned a PhD in civil engineering from the University of Illinois, Urbane-Champaign in 1971.

Tabujara is survived by his four children, Gloria, Jocelyn, Ricardo and Ernesto Jr. and five grandchildren.

His remains may be viewed starting Saturday, Jun. 21, 12 noon at St. Peter’s Memorial Chapel along Commonwealth Avenue. Interment will be at 10 a.m. on Wednesday, Jun. 25 at the Loyola Memorial Park in Marikina.

Tabujara, Jr. said that prayers are requested by the family, and that “we thank them for all the support of the UP community over the years for our parents, who have served the university all their lives.”