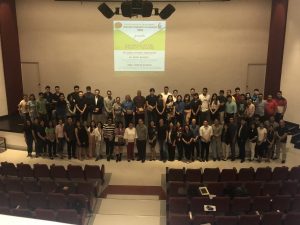 (AUG. 1)—A 2017 study by UP professors confirmed the presence of fine particulate pollutants from East Asia in the cold air coming into the country during the northeast monsoon (Hanging Amihan).

The New York State Department of Health defines fine particulate matter refers as “tiny particles or droplets in the air that are two and one half microns or less in width.” Exposure can cause short-term effects such as eye, nose, throat and lung irritation, coughing, sneezing, runny nose and shortness of breath.

The team was able to detect the presence of industrial emissions, solid waste burning and secondary sulfate in the form of fine particulate matter in samples taken from the air above the town of Burgos, Ilocos Norte during a 1-year period.

“LRT (long range transport) of anthropogenic [resulting from human influence on nature] fine particulates were observed during winter and springtime when the northeast monsoon serves as transport pathway for East Asian aerosols to reach the northern part of the Philippines,” the authors said.

The study, which appeared in the journal Atmospheric Chemistry and Physics, was one of three main lectures in the plenary session of the UP College of Engineering Environmental Engineering’s (EnE) mid-year colloquium held on Jul. 20 at the UP Institute of Civil Engineering (ICE) building.

The second lecture was by ICE Director Maria Antonia Tanchuling featuring her work surveying the microplastic pollution in Metro Manila. Microplastics are plastics that are 5 mm and smaller in diameter, the size that is easily ingested even by small aquatic organisms.

The third lecture was delivered by DOST Balik-Scientist Vicente DyReyes, who spoke on using finite element simulation, a mathematical numerical method, as a research and development tool in designing solutions to various engineering problems.

In her opening message, EnE program coordinator Leslie Joy Diaz encouraged the attendees and researchers to make full use of their time spent in the conference.

Topics ranged from using blockchain technology, which uses a single shared digital database, to design and monitor a residential area’s septic tank network, to developing a method of creating anti-corrosion additives from waste plastic sachets, which are difficult to recycle because of their complex composition.—Text and photo by Anna Regidor