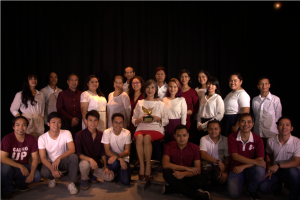 Hosted by Dr. Elizabeth L. Enriquez of the UP Department of Broadcast Communication, UP Nating Mahal features moving stories from and about the UP community, and its ties to Philippine society.

The two-hour special featured Enriquez’s paper on the history of radio, titled “Iginiit na Himig sa Himpapawid: Musikang Filipino sa Radyo sa Panahon ng Kolonyalismong Amerikano.” It was aired on DZUP on April 17, 2018. The lecture concert aimed to simulate the radio production era during the Philippines’ American colonial period, where members of the audience were able to witness live musical performances from various singers. The songs were arranged by Benedic Velasco,  guitarist and Padayon Rondalla member, and sung by UP Broadcast Communication alumni and students Darien Bas, Jessamae Gabon, Christel Lagdameo, Hannah Paguila, and Terrence Tolentino, who gave their own renditions of Filipino 1920s classics. 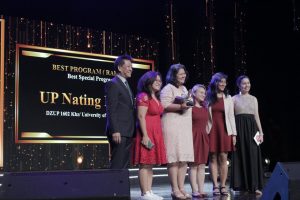 DZUP, the official AM radio station of UP Diliman, was also named finalist for the Best AM Radio Station in Metro Manila. Its programs DZUP Balita, Tropang RadYo!, and Health Republic were also recognized as finalists for Best Newscast Program, Best Comedy Program, and Best Science and Technology Program, respectively.

The Golden Dove, awarded by the Kapisanan ng mga Brodkaster ng Pilipinas (KBP), is conferred to individuals, groups, and stations who have outstanding performance, standards, and contributions to their respective fields. It aims to promote professionalism in broadcasting, as well as to elevate the standards of excellence and professionalism in the industry.