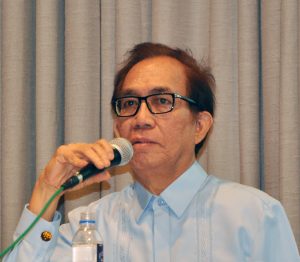 Posadas was Chancellor of UP Diliman from 1993 to 1996.  During his term, he organized the Technology Management Center (TMC);  the Center for Environmental Research, Education and Services; the Archaeological Studies Program and the Materials Science and Engineering Center.

He was the first dean of the College of Science, which was created when the College of Arts and Sciences was split into three separate units.  He was dean from 1983 to 1993 and it was during his term that interdisciplinary graduate programs in Molecular Biology and Biotechnology, Materials Science and Engineering and Environmental Science were established.

From 1980 to 1992, he served as Chairman of the Department of Physics at the former College of Arts and Sciences, where he was instrumental in instituting the 5-year BS Applied Physics program and the country’s first PhD program in Physics.

Posadas earned a PhD (Relativity Physics) from the University of Pittsburg, Pennsylvania, USA in 1970, with the doctoral dissertation “The Motion and Structure of Singularities in General Relativity”.  He graduated from UPD in April 1964 with a BS (Physics) degree.

He joined the University as an Instructor in 1964, teaching Physics until 1998. In the 1980s, he helped to conceptualize the undergraduate senior course Science, Technology and Society which he also taught. In 1992, he was a Professorial Lecturer at the Cesar E.A. Virata School of Business where he designed a new MBA course, BA 243: Managing Innovation.

There will be necrological service on August 24, 7 p.m. at the Loyola Memorial Chapels along Commonwealth Avenue, Quezon City.