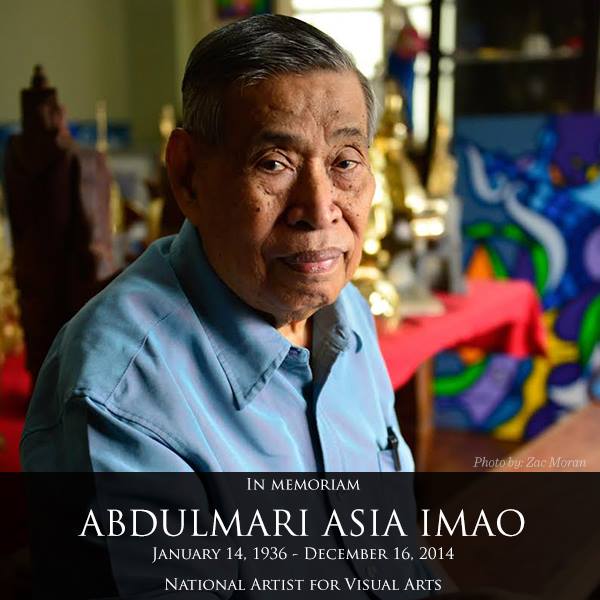 Dr. Abdulmari Asia Imao, beloved brother, father, and grandfather, a creative soul of the Bangsamoro, National Artist of the Philippines, peacefully joined Allah in the early morning of December 16, 2014.

It was Dr. Imao’s wish to accept a State Funeral upon his demise, as well as to hold a wake to allow family members and friends to pay their last respects and say goodbye.

Dr. Imao, “Mari” to his friends and colleagues, led a fulfilled and colorful life as an artist. Coming from very humble beginnings, he worked his way through school and several scholarships to chase his dream of being an artist. He adopted the mythical “sarimanok” of Maranao legends in his paintings and sculptures as a visual metaphor of the depth and richness of his native Mindanao, particularly the Sulu archipelago.

He studied at the College of Fine Arts, University of the Philippines, where he was mentored by fellow National Artists Guillermo Tolentino and Napoleon Abueva. He received a Schmidt and Fulbright Scholarship for graduate studies at the Kansas University in the USA. He also received two year-long fellowships at the Rhode Island School of Design and Columbia University in New York. He was the first Asian recipient of a Museum of Modern Art (MoMA) fellowship grant to study in Europe.

Upon his return in the Philippines, he taught Fine Arts at the University of the East. He also did several photo-journalistic and scholarly research work about the peoples of Mindanao. He studied and promoted indigenous brass casting techniques, and crafted several public art and historical installations around the country.

For his contribution to Philippine culture and the arts, he was inducted into the Order of National Artists in 2006 and awarded the Presidential Medal of Merit in 2005, the Gawad CCP para sa Sining in 1990, and the Gawad Patnubay ng Sining by the City of Manila in 1985, and the Ten Outstanding Young Men of the Philippines (TOYM) in 1968.

Dr. Imao’s works and motifs are deeply rooted in his Muslim upbringing, but he also embraced a healthy relationship and respectful dialogue with other faiths. His wife, the late Grace Bondoc De Leon was a devout Catholic from whom she bore four sons, Toym (Abdulmari Jr.) , Josemari, Sajid, and Kim. This strong inter-faith relationship is reflected in his paintings and sculptures and the attitude of his children towards art and society.

Dr. Imao is a true academic, scholar, a freethinker. He is a Muslim artist, but he is also a Filipino creative whose style and expression cut across cultural and religious limits. Dr. Imao described himself not just as religious but as spiritual. His faith is reflected in the exuberance of the patterns and colors of his artworks that celebrate life without borders.

We welcome and are grateful for the tribute (necrological service and state funeral) being planned for Dr. Imao by the NCCA and the CCP. We will be coordinating with the said agencies for the Muslim burial rituals that would be officiated alongside the military honors and burial ceremonies at the Libingan ng mgaBayani.