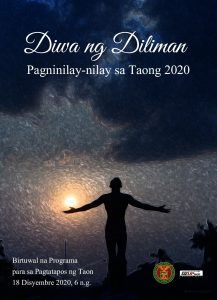 (UP Diliman Information Office)—UP Diliman’s (UPD) year-end program is about recognizing the small gestures of courage that buoyed the university’s fortitude as a community.

It is an important moment of rest and reflection, and both sober commemoration of the past year and tribute to the spirit of community and solidarity to forge toward the year 2021 with strength, dignity and resolve.

There will be a solo performance by Juan Miguel Severo, while The UP Dance Company will perform to the music “Matapos ang Pasko” by Krina Cayabyab. There is also a pre-recorded video of the UP Symphony Orchestra that will perform “Glorious Sounds of Christmas” arranged by Dwight Gustafson.

“Payapang Daigdig” is a Christmas kundiman composed by National Artist Felipe Padilla de Leon Sr. with lyrics by Brigido C. Batungbakal and Eduardo P. de Leon. A jeepney is a most popular transportation that in pre-pandemic time was seen plying everywhere in the Philippines. It evolved from the U.S. military jeeps that were left in the country after World War II. A regular jeepney can seat 19 people, a driver and two passengers at the vehicle’s front, and 16 other passengers seated eight on each side of the vehicle and facing each other. It is also known for its kitsch decorations. The end of the second world war or World War II happened in 1945. World War II was a global war that began in 1939 and involved a vast majority of the world’s countries including those known to be great powers, France, Germany, Great Britain, Italy, Japan the United States, the Soviet Union, and China.

The virtual ceremony will also feature two other videos. “Pagbabalik Tanaw sa 2020,” is a tribute to the resilience of the UPD community. It will show how UPD continued with its research, creative works and public service in spite of the eruption of Mt. Taal in January, the pandemic brought by COVID-19 and the declaration of the national government of a community quarantine or lockdown of the entire Luzon in March that lasted until now in December, and the succession of destructive typhoons, that include category 5 Rolly in October followed by category 4 Ulysses in November, that devastated nearly the entire Philippines. The UPD community united together to help others and give one another hope.

The last video to be featured will be on the lanterns prepared and designed by the various UPD units that adhere to the year-end program theme “Abot-kamay, Abot-tanaw: Sulong sa Bago at mas . na Bukas.”
The year-end program will also have messages for the community from UPD Chancellor Fidel R. Nemenzo, Vice Chancellor for Student Affairs Louise Jashil R. Sonido and UP President Danilo L. Concepcion. Marvin Olaes hosts. 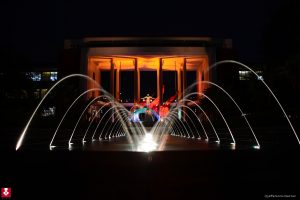 (DEC. 2)—UP Diliman’s first virtual Pag-iilaw, the ceremony heralding the start of Christmas festivities, brought cheer to the UPD community after a 2020 fraught with disaster and strife.

Held on the evening of Nov. 27 at Quezon Hall, the broadcast of the annual community event became more meaningful with many in quarantine.

So with the theme “Abot-Kamay, Abot-Tanaw: Sulong sa Bago at Mas Mainam na Bukas,” the Pag-iilaw gathered UPD’s various sectors in a live and virtual celebration to connect its various constituents the pandemic has physically separated. 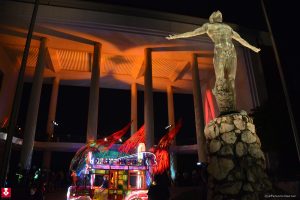 Pag-iilaw wanted to stir hope and anticipation for a brighter future as all commit to one goal of overcoming the global public health crisis and ease the sadness of separation.

Streamed live over the UPD and DZUP Facebook pages, the night began with a segment on past Pag-iilaw art installations of UPD alumnus and multimedia artist Abdulmari “Toym” de Leon Imao Jr., who has been commissioned every year since 2015. The segment ended with a pre-recorded interview with him discussing the meaning behind this year’s creation, “Parola.”

Parola is a multi-element installation consisting of a large flame lantern at Quezon Hall, an illuminated and oversized art car jeepney called “Azkal,” various smaller art installations placed at major campus portals and groups that have been key in UPD’s strategy to deal with COVID-19 (UP Health Service, Philippine Genome Center, Silungang Molave and Barangay UP Campus Hall). 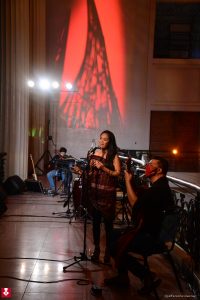 The next segment was singer Tapati, with UP College of Music (CM) professor Solaiman Jamisolamin on guitar, delivering a stirring rendition of Inang Laya’s “Diwa ng Pasko”.

This was followed by a pre-recorded audio-visual presentation (AVP) named “UP in 2020” voiced over by College of Arts and Letters Professor Olivia Kristine Nieto performing the poem “Awit ng Pag-ibig” by Joi Barrios-Leblanc.

Master of Ceremonies Prof. Jose Antonio Clemente of the College of Social Sciences and Philosophy then welcomed those watching the livestream to Quezon Hall lobby.

Messages for the community were delivered, beginning with Vice Chancellor for Community Affairs Aleli Bawagan, who said the Yearend Program Committee deliberated at length about whether to push through with the Pag-iilaw in light of the pandemic and the damages the typhoons Rolly and Ulysses brought in the weeks prior. 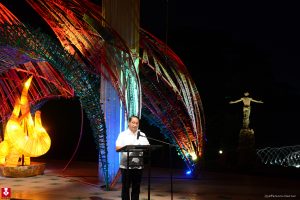 “Pinagkunutan ng noo ng buong team kung itutuloy o hindi [ang Pag-iilaw]. We seriously took these concerns into consideration as we planned for this event. In the end, we decided that a little bit of light to spread goodness and cheer to at least momentarily lift the spirit of the community is what we need during these uncertain times,” she said.

UP President Danilo L. Concepcion mentioned the UP System’s commitment to respond to the needs of its various stakeholders. 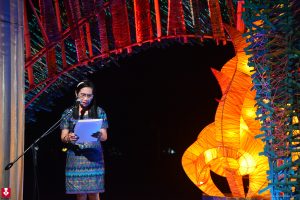 Barangay UP Campus Captain Zeny Lectura called on everyone to continue observing proper health protocols and to keep themselves and each other safe.

UPD Chancellor Fidel R. Nemenzo delivered the event’s last message. He encouraged those present to rise above the challenges the past year brought and build a better future. 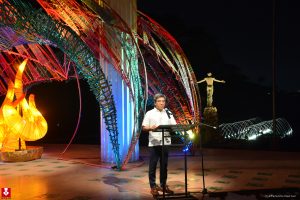 The actual switching on of lights began with the main video of Azkal slowly being “driven” from Commonwealth Ave. along the inner lane of University Ave. towards Quezon Hall—the lanterns placed along the University Ave. being lit as it travelled—while the CM’s UP Guitar Society played in the background. 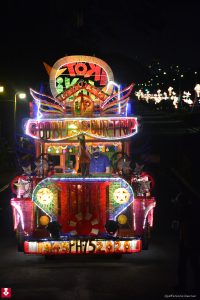 Every minute or so, live footages of the various art installations all over the campus were shown. The segment also featured the participation of several UPD community members wearing or using decorative holiday lights. Footage of the participants were taken from a zoom meeting conducted especially for the event.

All throughout the switching on of lights the UP Guitar Society played various holiday standards and were later joined by Tapati, who sang Felipe de Leon’s “Payapang Daigdig.”

Azkal eventually stopped in front of Quezon Hall directly behind The Oblation. Clemente then entered the jeep to conclude the ceremony, “driving” Azkal off camera. 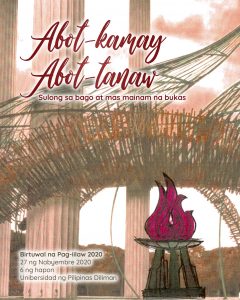 (NOV. 24, UPD Information Office) — No COVID-19 pandemic, strong earthquakes or violent storms can stop nor dampen the spirit of UP Diliman (UPD) from ushering in the Christmas season through its long-standing tradition of switching on the campus’ festive lights in Pag-iilaw para sa Pasko 2020: Birtuwal na Pag-iilaw (Pag-iilaw) on Nov. 27, 6 p.m. at the Quezon Hall. 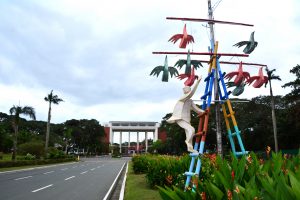 With the theme “Abot-Kamay, Abot-Tanaw: Sulong sa Bago at Mas Mainam na Bukas,” this year’s community event gathers UPD’s various sectors in a live and virtual celebration to connect its various constituents the pandemic has physically separated.  The celebration also aims to stir hope and anticipation for a brighter future as all commit to one goal of overcoming the global public health crisis and ease the sadness of separation.

Pag-iilaw will be streamed live on the UPD website (upd.edu.ph) and the official UPD Facebook page (https://www.facebook.com/OfficialUPDiliman) on Nov. 27.

The centerpiece of the Pag-iilaw is Toym Imao’s installation “Parola,” composed of ladders, human-shaped lanterns and red poles. 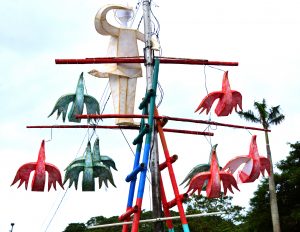 The ladders are made of bamboo and the lanterns are of wire and plastic sheets in red and green. One figure is climbing the ladder with an arm extended (abot-kamay), while the other has a hand above its eyes, seemingly surveying the surrounding area.  According to Imao, the red bamboo poles crisscross the ladders to bind the installation together, representing the challenges the figures have to overcome and the pandemic that has restricted everyone’s way of life. These are also the catalysts for the “damayan” efforts by the community amid the lockdown.

Units at UPD that have been beacons in the pandemic, namely the UP Health Service, Philippine Genome Center, Silungang Molave and Barangay UP Campus Hall will be lighted along with the Quezon Hall and the University Avenue.

UPD’s portals will also be lighted, symbolic of the University upholding its role as a critic of the society and nation it will continually serve.

The lighting ceremony is also a tribute to thousands claimed by the pandemic, particularly the frontliners.

Set to perform at the Pag-iilaw are Tapati with Eman Jamisolamin on guitar, and the UP Guitar Society.  Pag-iilaw also features the video “Abot-Kamay, Abot-Tanaw: Ang UP Bilang Tanglaw sa Panahon ng Pandemya” by Joyce Garcia.