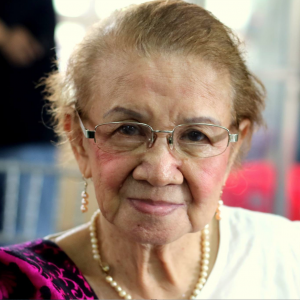 (MAY 31)—The UP Integrated School (UPIS) mourns the passing of Prof. Felicia “Betty” Delos Santos, former UPIS Assistant Principal for Academic Programs and Administration, on May 24.  She was 85.

Delos Santos was a Library Assistant and Research Associate at UP Asian Labor Education Center (UP ALEC, now UP School of Labor and Industrial Relations) from 1959 to 1966 before teaching at UPIS.

She graduated with aBS Secondary Education (major in English and minor in Library Science) in 1957and earned MA units in Communication Research on local fellowship at the UP Institute of Mass Communication (now College of Mass Communication) from 1978 to 1980.  Shefirst taught at the UP Preparatory School and UP High from 1966 to 1972, and later at UPIS from 1973 to 2000 where she rose from Assistant Professor to Associate Professor and where she taught English and Literature.

Delos Santos served UPIS both as an academic and administrator.  She was Assistant Principal for Academic Programs and Administration from 1990 to 1992 and Head of the Department of Communication Arts, English, Music and Arts from 1998 to 2000.

After 41 years of service, Delos Santos retired from UP in 2000.  This however, did not stop her from teaching as she continued to teach underprivileged children in various schools.

According to her granddaughter, Micaela Delos Santos, the former UPIS faculty had articles published in the “Chicago Tribune” and “Inquirer” and regularly contributed to UP publications and ICS Publishing, a textbook publishing company.

Delos Santos was born on March 8, 1935 and is survived by four children, 11 grandchildren and two great-grandchildren.–Image courtesy of the Delos Santos family through Micaela Delos Santos and the UPIS Centennial Homecoming Facebook Page