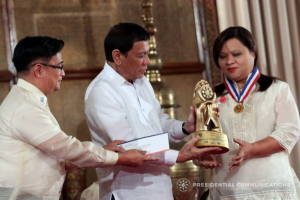 DnB or the Outstanding Public Officials and Employees Award is conferred to an individual for performance of an extraordinary act or public service and consistent demonstration of exemplary ethical behavior on the basis of his/her observance of the eight norms of behavior provided under Republic Act No. 6713, otherwise known as the Code of Conduct and Ethical Standards for Public Officials and Employees.

De Ungria was recognized “for her notable performance and unparalleled contribution in forensic DNA technology that has been critical in criminal investigation, in disaster victim identification and in resolving parentage disputes. She also provided technical assistance in drafting the Supreme Court Rule on DNA Evidence approved in 2007. Her passion for research enabled the institute to be awarded an P18-million research grant from the European Union for the development and validation of DNA test procedures for handling sexual assault cases which has effectively aided the Philippine judicial system.”

De Ungria is a University Researcher V, the highest rank for a Research, Extension and Professional Staff (REPS) in UPD and a Career Scientist II of the Department of Science and Technology – Civil Service Commission since 2013. She has a Professorial Lecturer 2 appointment from the College of Science for team-teaching the Science in Society Program (SSP) and the Biology 397 – Current Topics in Biology [Forensic].