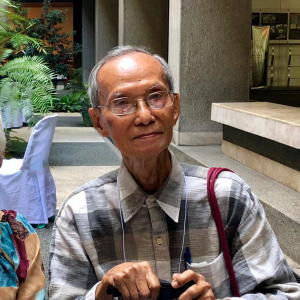 (MAR. 25)—Former Linguistics professor and Commissioner of the Komisyon sa Wikang Filipino (KWF) Ernesto H. Cubar passed away on Mar. 24 due to a lingering illness.  He was 91.

Cubar was among the first KWF commissioners appointed when it was established in 1991.  He served as KWF Commissioner until his retirement from government service.

He served as the Associate Dean of the College of Social Sciences and Philosophy from 1983 to 1989 and was Chair of the Department of Linguistics in the 1970s.

Cubar together with wife Nelly, authored “Writing Filipino Grammar: Traditions & Trends,” which to this day has served as a reference material for students and researchers of Philippine structural linguistics.

Recently, the Department of Linguistics launched the publication of his groundbreaking work, “Topicalization and other related process in Philippine languages” as The Archive Special Publication.

Cubar obtained his MA Linguistics from the University of California at Los Angeles (UCLA), USA under the Fulbright Smith-Mundt scholarship in 1961, and earned his BA English at UP in 1954.

Photo from UP Department of Linguistics