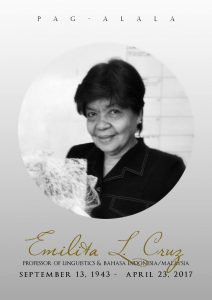 Prof. Emilita L. Cruz, one of the country’s leading experts in Philippine Linguistics and Bahasa Indonesia/Malaysia, passed away on Apr. 23.  She was 74.

Chegu (from Bahasa Malaysia cikgu meaning ‘teacher, professor’) as her colleagues fondly called her, was one of the pioneering researchers who conducted fieldwork in the different ethnolinguistic communities in the Philippines under University Professor Ernesto Constantino, considered as one of the pillars of Philippine Linguistics.  She was also one of the main proponents of establishing Bahasa Indonesia/Malaysia as the regional lingua franca of Southeast Asia.

Cruz obtained her BA in Foreign Service and MA in Linguistics from the University, and trained in Bahasa in different universities and institutions in Indonesia and Malaysia.

Her remains will be at the UP Parish of Holy Sacrifice Mortuary on Friday, April 28, from 10 a.m. to 4 p.m., during which a mass will be held at 1 p.m.to be followed by a necrological service.