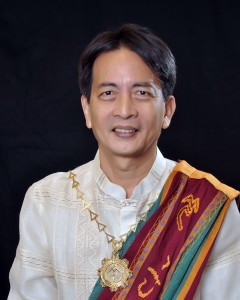 Dr. Michael L. Tan says bio introductions shouldn’t be all titles and degrees.  He wants to be remembered as being the product of great parents, Julio Divino Tan and Apolonia Nieves Calderon Lim, proud Chinese-Filipinos or Tsinoy who were teachers themselves initially and therefore skeptical about the teaching profession but “tolerated” his entry into the academe, eventually learning to take pride that they had an educator son.

He started his own family late in life, and is now raising (and being raised by) five adopted children, together with a menagerie of dogs and cats.  (He guards his children’s privacy zealously and asks that they not be named here.)  He is a solo parent, and has one child being homeschooled, but believes education is a matter of mobilizing friends and family, if not entire villages – real and virtual.

Dr. Tan’s education comes from the Jesuits (Xavier, Ateneo de Manila and the University of San Francisco) and “public schools” including UP and he believes a Jesuit and UP education is usually (emphasis on usually) an excellent combination.  He trained in veterinary medicine (DVM, UP Diliman, 1977), anthropology (MA, Texas A&M University, 1981) and medical anthropology (PhD, University of Amsterdam, 1996).

He worked with the Catholic Church’s social action programs from 1977 to 1981, mainly in community-based health programs in Mindanao and in Luzon, and with a community-based tuberculosis control program started by the late Dr. Mita Pardo de Tavera.

He founded a health NGO, Health Action Information Network (HAIN), concentrating on research and information for community-based health programs, government and non-government health agencies, mass media and legislators.  HAIN played a major role in pushing for health reforms in the post-EDSA era, particularly for issues that were often still around the radar, for example, around providing safe and affordable pharmaceuticals, responding to HIV/AIDS (in the late 1980s, when it was still emerging in the Philippines), reproductive health.

Dr. Tan began to teach in UP in 1985 but remained active in the NGOs and, increasingly, with international groups tapping him for consultancies, including the World Health Organization, UNICEF and various bilateral aid agencies.   In 1997, he began to handle administrative tasks, first as anthropology field school director, then as chair of the anthropology department, dean of the College of Social Sciences and Philosophy and, from 2014 to 2020, chancellor of UP Diliman.

Even as an administrator, all the way up to his chancellorship, he continued to teach and to be active in the formulation of new courses and pedagogies not just in the College of Social Sciences and Philosophy but also in the Tri-College Philippine Studies program, the Science, Technology and Society (STS) program of the College of Science and the institution of a master program in medical anthropology in UP Manila.

As chancellor of UP Diliman, his programs pivoted around pride in place and pride in people, bold visioning and the addition of compassion to honor and excellence.  He accompanied UP Diliman through many crises and disasters, all the way up to the ongoing Covid-19, and also challenges, including K-12 and the review of all of our course offerings.   Warning about “resting on our laurels,” he worked to revitalize many programs and activities in UP Diliman, from dorms and the food service, to the UAAP and varsity.  In addition, he identified psychosocial needs as an important priority and pushed for a PsychServe (psychosocial services) that tapped into different modes for prevention, all the way up to emotional support animals, for the management of mental health challenges.

During his term, he sought to overcome UP exceptionalism, encouraging faculty, students and staff to engage the world outside, including speaking out on national issues.  UP as a national university, he said, should mean we are a university open to all and during his term UP Diliman hosted numerous delegations and mobilizations from marginalized sectors, including LGBT+ (mga kabaro he says), farmers, workers, urban poor and, notably, lumads and indigenous peoples, calling them our visiting professors.

Dr. Tan has published in numerous scientific journals and has written several books, notably Revisiting Usog, Pasma, Kulam and Thinking and Doing Culture, both of which have been reprinted multiple times.  A firm believer in public social science, Dr. Tan writes a column, “Pinoy Kasi,” in the “Philippine Daily Inquirer” and often speaks at conventions and training seminars.  During this lockdown, has conducted 11 webinars on Covid-19 related issues during the current lockdown.   He describes his work as “promoting science and compassion,” emphasizing we need to fight the virus, not people.

In 2017, he was appointed Professor Emeritus but jokes that it only means UP considers him old and ready to put out to pasture. He continues to teach in UP Diliman, UP Manila and, he hopes to start this new semester, even online, in UP Los Baños, where he wants to do One Health, an integration of human, veterinary and environmental health.

Dr. Tan believes guest speakers can get usog (or balis in Cebuano) from long introductions so we end here.