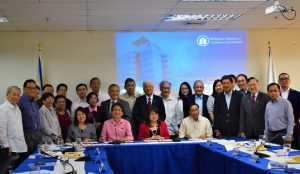 (SEPT 4)–The Confucius Institute at the University of the Philippines Diliman (CI-UPD) will offer the Chinese Mandarin for Managers Course at the Philippine Chamber of Commerce and Industry (PCCI) and its 120 local business chambers and industry associations around the Philippines.

The cooperation between PCCI and CI-UPD was formalized with both parties signing a memorandum of agreement on Aug. 28 at the PCCI Headquarters in Fort Bonifacio, Taguig City.

According to the CI, the cooperation is in the best interests of the organizations and their stakeholders. It will serve to strengthen the economic and cultural ties between China and the Philippines and help promote the competitiveness of Filipino businessmen nationally and internationally.

PCCI is committed to uplift the socio-economic status of regions, provinces, and cities through the development of globally competitive Small and Medium Enterprises and business in general.

The CI-UPD was established through an agreement between UP and the Confucius Institute Headquarters of China or Hanban, led by its Chief Executive, Mme. Xu Lin, on Dec. 7, 2014 and was inaugurated on October 12, 2015.

CI-UPD is a collaborative educational and service partnership between the UPD and Xiamen University (XMU).  One of its objectives is to strengthen the educational and research cooperation between China and the Philippines, particularly in the areas of language, art, literature, film, culture, the natural and social sciences and engineering, medicine, agriculture, aquaculture, and business.

The CI-UPD is the 476th CI worldwide, 16th CI established by XMU as a partner and the fourth CI in the Philippines.