(DEC. 5) — The Christmas lights were switched on but the party just started. 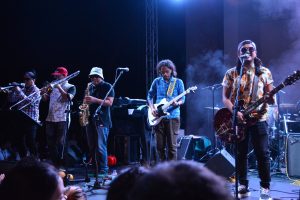 After the annual Pag-iilaw held on Nov. 29 at the UP Carillon Plaza, local bands We Got and Moonstar88 wowed the UP Diliman (UPD) community with a concert at the UP Washington Sycip Garden of Native Trees.

The bands performed original and cover songs as the crowd sang to their hearts’ content, with some even using their mobile phones as light sticks.

We Got opened the night with an original composition “Kakaiba Ka,” followed by original and cover songs – “LDR,” “Cindy,” “Don’t Know What to Do,” “Weak,” “Ligaya” ending with another original, “Lihim na Pagtingin.” 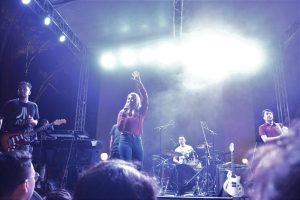 Moonstar88 started with an original, “Gilid,” followed by originals and covers – “Sulat,” “Migraine,” “Panalangin,” “Last Christmas” capping the night with their first hit song, “Torete,” much to the crowd’s delight.

After the concert, the festivities continued with the UP College of Human Kinetics Street Party as UPD celebrated the achievements of the UP varsity players during the first semester of UAAP Season 82. – Benito V. Sanvictores Jr., images by Jacelle Isha B. Bonus