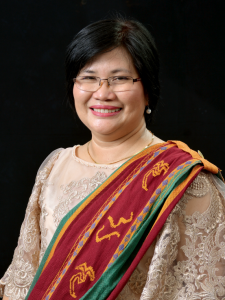 (DEC. 9)—Prof. Shirley Guevarra, PhD, of the Department of Hotel, Restaurant and Institution Management (HRIM) was appointed as the 14th dean of the College of Home Economics (CHE) effective Nov. 28.

Guevarra earned her Master in Food Service Administration and PhD in Philippine Studies both from UP Diliman (UPD) in 2000 and 2011, respectively. In 2006, she took Advance Seminar on Different Hotel Management in Tourism at the Hosteleria de Compostela in Galicia, Spain.

A professor of Hospitality Management, Guevarra has been with the University for more than two decades and was HRIM department chair from Oct. 2007 until Oct. 2013. Her research interests are on Hazard Analysis Critical Control Point system, environmental management, property management and human resource management, and food and cultural tourism.

She also served UPD in various administrative positions. She was the Officer-in-Charge of the Office of Student Housing from June 2014 until Nov. 30, 2019, and as Acting Director of the UP Business Concessions Office from Jan. 16, 2006 until Dec. 31, 2007.

Guevarra is a recipient of various awards and citations, among them the UP Centennial Professorial Chair Award (2017-2018 and 2014-2015), the UP Centennial Faculty Grant (2016-2017), the UP International Publication Award (2016) and the Best Research Paper in the 18th Asia Pacific Tourism Association Conference, Taipei, Taiwan in June 2012.  — Bino C. Gamba