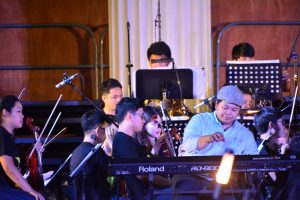 (DEC. 17)— The last full moon of the year happened on December 12, perfect for an open-air evening concert.

The concert opened with UPSO’s rendition of Leroy Anderson’s A Christmas Festival, an arrangement of excerpts from various Christmas songs.

UPSO then accompanied the UP Singing Ambassadors performance of “Alleluia” by Wolfgang Amadeus Mozart, and “Paskong Anong Saya” by National Artist for Music Levi Celerio and T. Salcedo. The UP Concert Chorus then followed with a gospel song “Wade in the Water” by Moses Hogan, and “Simbang Gabi” by National Artist for Music Lucio San Pedro. The two chorale groups kicked the concert into a higher gear. 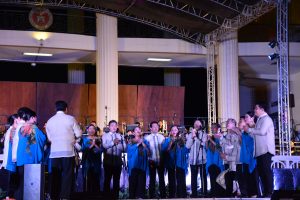 2017 Aliw awardee for Best Classical Performer and 2018 Best Female Crossover Performer, singer songwriter Lara Maigue, accompanied by the UPSO, wowed the audience with her version of the charming and magical “Doll Song” from the opera The Tales of Hoffmann by Jacques Offenbach, and the swingy and naughty 1953 Christmas song “Santa Baby” by Joan Javits and Philip Springer.

After the solo number by Maigue, UPSO once again regaled the crowd with their version of J. Christensen “Season’s Greetings.”

For the next act, the UP Staff Chorale Society performed Krismas Halu-halo by Gerry de Leon. Then the UP Madrigal Singers, under the baton of Mark Carpio, took to the stage and performed “Paskong Walang Hanggan” by National Artist for Music Ryan 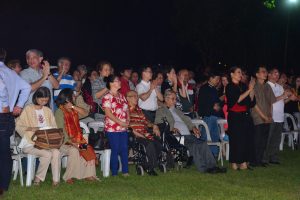 Another featured soloist took the spotlight of the evening concert. College of Music faculty member Jourdan Petalver, a virtuoso pianist, together with the UPSO performed George Gershwin’s “Rhapsody in Blue,” a stunning American jazz classic, which left the audience in awe with his skillful piano-playmaking.

For the evening’s final and grandest offering, the UPSO, the University-based Choral groups, and four vocal soloists: soprano Angeli Benipayo, mezzo-soprano Michelle Mariposa, tenor Malvin Macasaet and baritone Jeconiah Retulla, treated the audience to one of the greatest achievements of the Western music, which included chorus and vocal soloists, the first in any symphony —Ludwig van Beethoven’s monumental “Ode to Joy” Symphony No. 9, 4 th and final Movement. 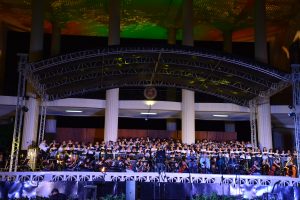 UPSO’s performance of “Ode to Joy” is their tribute to the 250 th birth anniversary in 2020 of Beethoven, considered to be one of the greatest composers of all time.

An extra treat by the UPSO was the community singing of Christmas Carols: Payapang Daigdig, O Come All Ye Faithful, O Little Town of Bethlehem, Hark the Herald Angel Sings and Joy to the World.

UPSO, under the direction of Josefino “Chino” Toldeo, was established by the UP Board of Regents at its 1337 th  meeting on August 30, 2018. UPSO consists of 65 members exclusively from the UP community: alumni, students, faculty members and staff. The Orchestra functions as a training ground for both composers and musicians, and as representative of not only the University but also of the country in
the worldwide stage. — Bino Gamba, photos by Leonardo Reyes