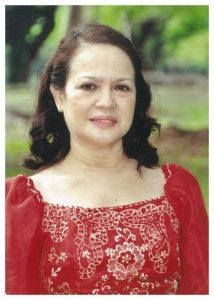 (JUNE 24)— Adelaida F. Lucero, PhD, a professorial lecturer at UP College of Arts and Letters (CAL), is one of the 10 NRCP Achievement Awardees for 2019 of the Department of Science and Technology-National Research Council of the Philippines (DOST-NRCP).

According to DOST-NRCP, the 2019 awardees were recognized “for their significant contributions to their respective fields and research advancements that benefitted the different sectors of economy.”

Lucero was cited for her academic leadership and championing “teaching-learning situations, research and publications, and an atmosphere of academic freedom and gender equality to nurture and foreground a strong general education coupled with a dynamic liberal education for college and beyond,” the DOST-NRCP announced.

Lucero was a NCRP Governing Board member from 2015 to 2019 and served as Division of Humanities chair.

She previously served as chair of the CAL Department of English and Comparative Literature and is currently a Professorial Lecturer 5 at the department.

Among her published works are “Protest and Affirmation in Selected Other Novels: from postwar years to the sixties” (2017, International Journal of English Language, Literature, and Humanities); “Trolls & Trolling” (2012), a term paper which she co-authored with Ma. Angela G. Batacan; “Rethinking the Third World Novel” (1997, Philippine Journal of Third World Studies), and “The Politics of the “weak” : from marginality to subversion” (1985-1995, Philippine Humanities Review).

The DOST-NRCP announced the 10 achievement awardees as well as the two Outstanding Institution Awardees for 2019 on their website on Jun. 19.

The recipients will be officially presented at the NRCP Annual Scientific Conference and 87th General Membership Assembly which will be done through an online platform on Jun. 30.