Buitre leads UP to a win over UE 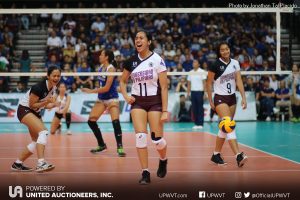 Buitre, who filled up for the injured Isabel Molde, scored 19 points built on 16 attacks and three blocks to lead UP’s assault as they duplicated their five set win against UE in the first round.

The two teams took turns in taking the first four sets, with the Lady Maroons winning the first and third frames, while UE took the second and fourth sets. 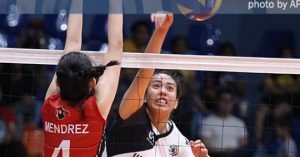 UP had a good start in the final canto, establishing a comfortable 9-5 lead behind Buitre, Maristela Layug and Diana Mae Carlos superb plays. UE, however, came back to cut the lead to a single point, 9-10, but the Lady Maroons regrouped and made a counter-run to create a separation and eventually took the match point, 14-9. UE was able to save two match points until a net touch violation by a UE’s Roselle Baliton gave UP the win.

The Lady Maroons are now in a share at the fourth spot with a 6-4 win-loss cards.

The Lady Maroons will try to solidify their final four bid against the Far Eastern University Lady Tamaraws on Apr. 6 at the Araneta Coliseum. — Bino Gamba photo by UPWVT and ABS-CBN