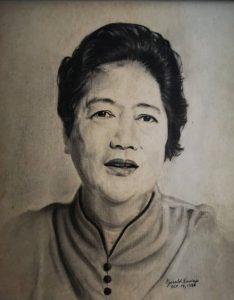 (JUL. 30) — On Jul. 20, at 3 p.m., the UP Department of Sociology posted on its Facebook page the passing of Professor Emeritus Ofelia Regala-Angangco, “beloved mentor to many generations of sociologists, social scientists and educators and former UP College of Arts and Sciences (CAS) dean.”

Diliman Preparatory School also posted at its Facebook page the passing of Angangco on Jul. 19.  The noted sociologist and Founding President of the Philippine Studies Association Inc. (1984) was DPS’ Chairman Emeritus.

The January-March 1981 issue of “UP Gazette” mentioned that the noted sociologist has many researches including “a collaborative work on the status of women in the Philippines and a study of the export processing zone and its socio-economic implications.  She also led a national survey of competencies of the social sciences faculties of various colleges and universities.”

Professor Emeritus in Sociology Randolf S. David in his tribute to Angangco that was published in the Department’s Facebook page said her brand of academic leadership was legendary.

“She built the Department of Sociology from the small academic unit that it was in the late 50s into what it is today — a center of excellence and a leader in social science research and education,” David said.  He added that Angangco managed to insulate the department from the professional bickering that is typical in academic settings.

“Under Professor Angangco’s watch, the Department of Sociology stood out as the model of successful academic matriarchy—the envy of all in a university environment where corrosive factionalism was fast becoming the norm,” David said.