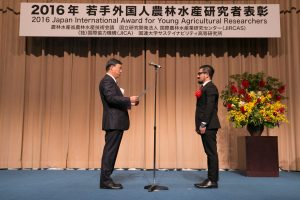 Noted scientist and Food Science and Nutrition professor Dr. Alonzo A. Gabriel received another accolade from the Japan International Research Center for Agricultural Sciences (JIRCAS) of the Japan Ministry of Agriculture, Forestry and Fisheries.

Gabriel was one of the three recipients of the 2016 International Award for Young Agricultural Researchers during the commendation ceremonies on December 1 at the United Nations University, Tokyo, Japan. He was honored for his outstanding researches in the field of Food Science and Technology.

Now on its 10th year, the award is given to young researchers contributing to research and development in agriculture, forestry, fisheries, and related industries in developing countries.