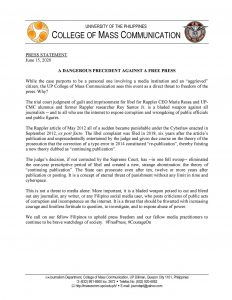 While the case purports to be a personal one involving a media institution and an “aggrieved” citizen, the UP College of Mass Communication sees this event as a direct threat to freedom of the press. Why?

The trial court judgment of guilt and imprisonment for libel for Rappler CEO Maria Ressa and UP-CMC alumnus and former Rappler researcher Rey Santos Jr. is a bladed weapon against all journalists — and to all who use the internet to expose corruption and wrongdoing of public officials and public figures.

The Rappler article of May 2012 all of a sudden became punishable under the Cyberlaw enacted in September 2012, ex post facto. The libel complaint was filed in 2018, six years after the article’s publication and unprecedentedly entertained by the judge and given due course on the theory of the prosecution that the correction of a typo error in 2014 constituted “re-publication”, thereby foisting a new theory dubbed as “continuing publication”.

The judge’s decision, if not corrected by the Supreme Court, has –in one fell swoop– eliminated the one-year prescriptive period of libel and created a new, strange abomination: the theory of “continuing publication”. The State can prosecute even after ten, twelve or more years after publication or posting. It is a concept of eternal threat of punishment without any limit in time and cyberspace.

This is not a threat to media alone. More important, it is a bladed weapon poised to cut and bleed out any journalist, any writer, or any Filipino social media user, who posts criticisms of public acts of corruption and incompetence on the internet. It is a threat that should be thwarted with increasing courage and limitless fortitude to question, to investigate, and to expose abuse of power.

We call on our fellow Filipinos to uphold press freedom and our fellow media practitioners to continue to be brave watchdogs of society. #FreePress, #CourageOn, #DefendPressFreedom