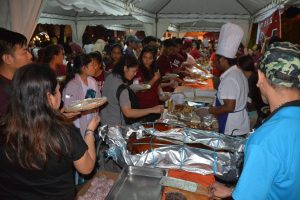 (DEC. 5)—The Pag-iilaw sa Pasko 2019 was only the beginning of the night’s festivities. The College of Human Kinetics held a street party at the Washington SyCip Garden of Native Trees behind the Carillon Plaza.

The community celebration “Pailaw/Pasasalamat” was organized in honor of the UP varsity teams who participated in the first semester, especially the UP Men’s Basketball Team who won bronze in the University Athletic Association of the Philippines (UAAP) Season 82.

The University Theater parking lot was converted to an impromptu venue, with large party tables laden with food and roasted meats donated by corporate sponsors and UP alumni groups.

In between musical acts Funky Brew and DJ Jon Tupaz, all the podium finishers of the first semester were called to the stage such as the seniors of the UP Men’s Basketball Team, the Taekwondo and Poomsae teams and the UP Pep Squad.—Anna Regidor, image by Leonardo Reyes