The competition held online in Nur-Sultan City, Republic of Kazakhstan from Nov. 16 to 21 was organized by the Kazakh National University of Arts in cooperation with Kazakhstan’s Ministry of Culture and Sport which aims to popularize “contemporary music in all diversity” and support and popularize “the creativity of young composers.”

Both joined the said competition while still CMu students.

According to UP College of Music, Ansale’s “Ang Ouroboros” won first prize while Buencamino’s “PinaginipangHibla” bagged the second prize in the Symphonic Composition category for composers ages 15 to 25.

Ansale wrote in his Youtube Channel that “Ang Ouroboros” is “a one movement symphonic poem for orchestra.”   He played it during his graduation recital. 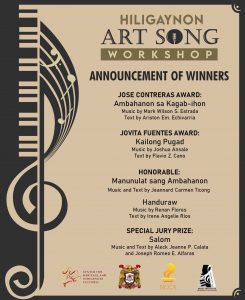 In related development, Ansale also won the Jovita Fuentes Award for his art song “KailongPugad” in the Hiligaynon Art Song Workshop. The announcement was posted in the Center for Heritage and Indigenous Cultures – University of San Agustin Facebook page on Dec. 5.