(JUN. 26)—UP Diliman recognized the exemplary accomplishments of thirteen individuals, three programs and one organization in the Gawad Tsanselor 2019 in ceremonies at the Institute of Biology Auditorium on Jun. 21.

Of the individual awardees were five professors, four Research, Extension and Professional Staff (REPS), one administrative staff and three students.

Three faculty members were chosen as Natatanging Guro. They were Prof. Alberto V. Amorsolo Jr., PhD of the College of Engineering Department of Mining, Metallurgical and Materials Engineering; Prof. Fernando DLC Paragas, PhD of the Department of Communication Research at the College of Mass Communication; and Prof. Joefe B. Santarita, PhD, currently dean of the Asian Center. 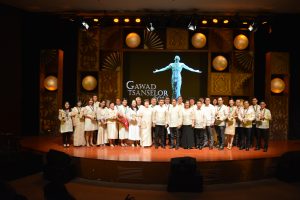 The Natatanging Guro recognizes the faculty’s excellence and dedication in all aspects of service to the University and the nation. It also considers the awardees’ expertise in their discipline and their research and creative work outputs.

Prof. Roland B. Tolentino, PhD was chosen as Natatanging Mananaliksik sa Filipino. A professor at the College of Mass Communication Film Institute, he was recognized for his choice and use of Filipino in his researches as the language to advocate nationalism.

Prof. Violeta Villaroman-Bautista, PhD, of the Department of Psychology of the College of Social Sciences and Philosophy was one of the Natatanging Lingkod Komunidad awardees. She was cited for establishing PsycServ and her dedication to support the University’s mental health initiatives.

The Natatanging REPS, which recognizes excellence in research and extension work, was given to three individuals, namely Josephine Cecilia L. Baradas, a University Researcher I at the College of Music; Sherry Lyn G. Sayco, a University Research Associate I at The Marine Science Institute of the College of Science; and Leoncio T. Cubillas Jr. and Rolando Ramon C. Diaz, both University Extension Specialist V at the UP Institute for Small Scale Industries.

Judimar M. Dulay, a Laboratory Technician 1 at the Institute of Chemistry, was named Natatanging Kawani. The recognition is given to administrative personnel with exemplary contributions to the University.

Three students were named Natatanging Mag-aaral. They were Joseph Neos C. Cruz, fourth year at the National Institute of Molecular Biology and Biotechnology of the College of Science; Carissa Andrea D. Lim, fifth year at the Cesar E.A. Virata School of Business and Angelica Y. Yang, fourth year at College of Mass Communication Department of Journalism.

The award recognizes excellence in a student’s academic performance including research and creative works, along with his or her contributions to the community and the nation. 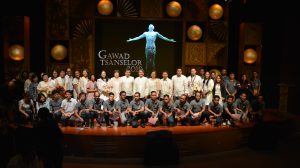 Three programs were chosen as Natatatanging Programang Pang-Ekstensiyon. The distinction is for exemplary service to the public in the form of technical assistance, extramural program, advocacy and community mobilization, among others.

Among the winners were the Open School of Music of the College of Music, which provides free training in voice and musical instruments to interested individuals who otherwise cannot afford such; the NISMED Lesson Study Program of the National Institute for Science and Mathematics Education Development which provides science and mathematics teachers with further training; and the Task Force on Solid Waste Management for promoting innovative and affordable waste management technologies on campus.

The Church of the Risen Lord (CRL) was the other awardee for Natatanging Lingkod Komunidad. The CRL was cited for its Abot Kaya Tanghalian program which provides students free lunch.

The Office of the University Registrar–Computerized Registration System (OUR-CRS) received a special citation for institutionalizing UP Diliman’s computerized registration system which has resulted in a more organized, quick, efficient and queue-free registration.

Prof. Jose Antonio R. Clemente of the Department of Psychology hosted the event, which featured the Mabini String Quartet, Poppert Bernadas and Lara Maigue—Chi A. Ibay, images by Leonardo A. Reyes