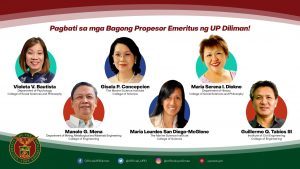 (AUG. 5) —Six of the 11 faculty members conferred by the UP Board of Regents (BOR) with the title Professor Emeritus are from UP Diliman (UPD).

The conferment of the prestigious award for outstanding academic service was approved by the BOR at its 1352nd meeting on Jul. 30.

Bautista. A professor of Psychology, Bautista is a strong advocate for mental health and its awareness in UPD in particular and the country in general. She established the UPD Task Force for Psychosocial Services (PsycServ) and was appointed its Director in 2017.

A noted academic, psychologist and researcher, Bautista heads the UPD Psychology Department’s Clinical Psychology Program and was the former director of the Office of Counseling and Guidance.  She is also President of Care and Counsel Wholeness Center, a center committed to helping families, workplaces and communities, and Director of Life Change Psychological Services.

For her accomplishments in advocating mental health awareness and her efforts at UPD PsycServ, Bautista was recognized as one of the Natatanging Lingkod Komunidad at the 2019 UPD Gawad Tsanselor.

Concepcion. A professor of Marine Science and ranked UP Scientist III, Concepcion was UP Vice President for Academic Affairs from 2011 to 2017. She was inducted as Academician at the National Academy of Science and Technology (NAST) in 2008.

The current president of the Philippine-American Academy of Science and Engineering (PAASE), she led the campaign to increase government support for science and technology in the Philippines.

Her various studies on bioactive compounds from marine organisms and the appreciation and protection of marine life earned Concepcion many awards, among them the 2016 Department of Science and Technology (DOST) Outstanding Science Administrator Award (Dioscoro L. Umali Medal), the 2015 UP Scientific Productivity Award as Scientist III and the 2013 Philippine Federation of Chemical Societies Awardee for Chemical Research.

Diokno. A professor of History, Diokno is an expert in public history, 19th century Philippines and Southeast Asian studies.  She has held various academic and administrative positions in the university, foremost of which is as UP Vice President for Academic Affairs from 1999 to 2005.

As a scholar, Diokno served as Chair of the National Historical Commission of the Philippines in 2011 until Nov. 29, 2016, when she resigned because former Philippine President and known dictator Ferdinand E. Marcos was allowed to be buried at the Libingan ng mga Bayani. A distinguished scholar of the region, Diokno has actively participated in the Southeast Asian Studies Regional Exchange Program (SEASREP) Foundation, a network of Southeast Asian scholars advancing Southeast Asian studies.

San Diego-McGlone. A professor of Marine Science, she holds the rank of UP Scientist I.  She is noted for her expertise in nutrient biogeochemistry in coastal systems, sediment-water interaction, estuarine chemistry, marine pollution, environmental impact of agriculture/marine culture, blue carbon, and ocean acidification.

She has published over 60 papers in international and local journals and has written 5 book chapters. In 2008, she received the Best Published Paper in Marine Fisheries, E.O. Tan Memorial Award, Los Baῆos Science Community Foundation, Inc. for her work on eutrophic waters, algal bloom and fish kill in fish farming in Bolinao, Pangasinan. In 2016, her team received the UP System Invention Disclosure Incentive award for their invention of a device used to control tropical harmful algal blooms.

San Diego-McGlone is the current head of the Marine Biogeochemistry Laboratory at The Marine Science Institute (MSI). The laboratory examines the environmental stressors and their impact on coastal systems. She was MSI Director from 2006 to 2012.

She earned her PhD in Chemical Oceanography from the Old Dominion University, Virginia, USA in 1991 where she was recognized as Outstanding PhD Graduate in Oceanography.

Mena. A professor of Engineering, Mena owns 14 patents in various fields in the Philippines and the United States and is the current director of the National Graduate School of Engineering. A mentor to 43 students of masters and doctoral degrees, Mena is faculty member of the Department of Mining, Metallurgical and Materials Engineering.

He earned his doctorate in metallurgy from the University of Utah in 1983 and his MS Metallurgical Engineering from UP in 1979.

According to the National Academy of Science and Technology (NAST), his work on 2-dimensional hydraulic modeling using finite volume method has been applied to river restoration projects in China.

According to NAST, Tabios developed the pipe network model with optimization for the Metro Manila water distribution system that facilitated the detection, surveillance and quantification of water lost due to pipe leakage or pilferage, for planning and expansion studies of optimal pipe network distribution system and for normal pipe operations. His optimization-simulation model for monthly reservoir operations of the Angat Reservoir has led to a dynamic, anticipatory operation policy over a 6-month planning horizon in satisfying water demand.

The University Faculty Manual defines professor emeritus as a title for life and is conferred upon retired faculty members in recognition of their exceptional achievements and exemplary service to the university.

A professor emeritus receives a 1-time P150,000 monetary grant, lifetime privileges, health service privileges and free admission to cultural shows in UP, among others.