The University of the Philippines Marine Science Institute (UPMSI), College of Science, UP Diliman (UP SCIENCE) would like to clarify some of the issues regarding the on-going MSR (Marine Scientific Research) of Chinese scientists in the northeastern Philippines where the Philippine Rise (Benham Rise) is located.

The research cruise by the Institute of Oceanology, Chinese Academy of Sciences (IOCAS) using the research vessel Ke Xue aims to measure temperature, salinity and current distributions in several locations along a line (transect) at 18°N and 8°N, and to deploy instruments at the western edge of these transects that will measure ocean currents and their variations in velocities and directions at different depths together with other water properties,continuously for an extended period of time (e.g. at least a year).

Due to time constraints, the transect and moorings at 8°N have been cancelled, and the plan is to conduct CTD (Conductivity, Temperature, Depth) measurements (open circles) and to deploy instruments for time series measurements (red circles) along 18°N (north of the Philippine Rise) shown in Figure 1. It is estimated that the Ke Xue will be working within the Philippine Exclusive Economic Zone for about three to six days. 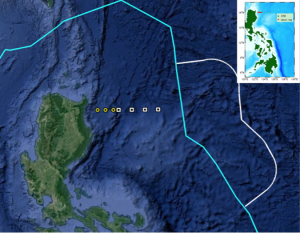 Figure 1. Research cruise plan of IOCAS. Circles are where instruments will be deployed for long-term monitoring and squares are stations where water profile measurements will be conducted. Blue line represents Philippine EEZ and white line the ECS. Inset: Map of Philippines showing cruise track.

Why are these kinds of measurements important?

East of the Philippines, a westward flowing body of water called the North Equatorial Current (NEC) splits off the Philippine coast to form northward and southward moving bodies of water known as the Kuroshio Current and the Mindanao Current, respectively (Figure 2). 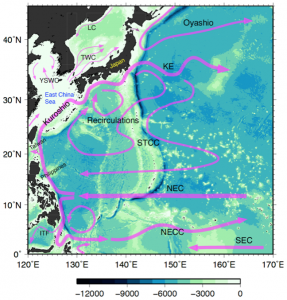 Figure 2. Simplified diagram of the major ocean currents in the Western Pacific facing the eastern seaboard of the Philippines.

The Kuroshio is responsible for the transport of heat to the rest of the North Pacific and therefore is an important driver of the regional climate and even the El Niño/La Niña cycles. This can be seen in Figure 3, which shows a large amount of heat released from the ocean surface in the northwest Pacific (red areas south of Japan in Figure 3). Most of this heat comes from the tropics east of the Philippines and transported northward by the Kuroshio across a 100-km width of ocean east of northern Isabela (18°N). This is where the IOCAS instruments are to be deployed to measure the volume and heat content of the water flowing to the north.

If the Kuroshio Current strengthens, more heat is transported to the subtropical Pacific. When it weakens, more heat is retained in the tropical Pacific because of a stronger Mindanao Current. The strength of the Kuroshio changes with season, with El Niño/La Niña cycles, and at decadal timescales. To understand the Kuroshio’s role on climate and to help develop predictive models, we need to know how often and by how much it varies; thus the need to measure the currents and temperature structure over a long period of time. 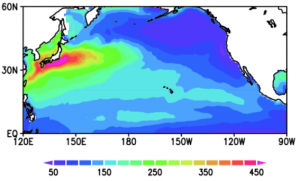 UP MSI’s role in the present Chinese MSR

As part of our research, UPMSI has been interested in understanding the dynamics related to the splitting of the North Equatorial Current and the origin of the Kuroshio and Mindanao Currents for a long time. From 2011-2014, we collaborated with US scientists under the OKMC (Origin of the Kuroshio and Mindanao Currents) program where two research cruises were conducted. Results from these cruises clearly showed that measurements over longer periods were needed, validating the insights from pioneering research that started in the early 1980s. Studies with long-term measurements can only be achieved if resources from different countries are combined and shared.

In 2016, the Chinese oceanographers initiated discussions about possible collaboration on this particular MSR through an international collaborative observational program called the North Pacific Ocean Circulation Experiment (NPOCE), which IOCAS leads. As it was related to our research interests, we continue to explore ways to meaningfully engage with them. This collaboration also supports our initiative to develop a national oceanographic program that can help address societal demands in understanding the changing climate and ocean processes in partnership with both local and foreign collaborators.

Benefits of international collaboration: What’s in it for the country?

Understanding the dynamics of these major ocean current systems is complex and requires extensive resources. For research questions that involve large-scale processes beyond national jurisdiction, international collaboration is important because the collective efforts, data and information from all countries involved will enable us to acquire a better understanding of what is really happening.The oceanographic processes in the Pacific seaboard of the Philippines are highly relevant to other countries because they affect the whole subtropical and tropical Pacific and affects climate variations in the region. In addition, lessons from these oceanographic processes help explain changes in the productivity of the ocean (which is crucial to fisheries management) and contribute to new knowledge (such as changes in monsoon and typhoons), all of which are important in the sustainable development of the northeastern Philippine biogeographic region.

UPMSI has been collaborating with oceanographers from different countries (such as the US, South Korea, Japan, China and Taiwan) on research along the Pacific seaboard as early as the 1980s. Some of the more recent projects and collaborators are the following:

Our own efforts: research programs of UPMSI in the Pacific seaboard

UPMSI has been conducting research along the Pacific seaboard and the Philippine Rise in collaboration with Philippine government and research institutions. In the early 2000, the Department of Science and Technology (DOST) and DOST-PCAARRD (Philippine Council for Agriculture and Aquatic Resources Research and Development) provided support to implement the Pacific Seaboard Program Phase 1 and 2. This was the first comprehensive assessment of coral reef resources and oceanographic studies that covered the whole eastern seaboard of the Philippines. It also involved several academic institutions, such as the De La Salle University.

From 2014-2017, the DOST-PCAARRD supported the UPMSI and the National Institute of Geological Sciences (NIGS) of UP Diliman, and the School of Environmental Science and Management (SESAM) of UP Los Baños to conduct two research-cruises to the Benham Bank and adjacent areas using the research vessel of the Department of Agriculture- Bureau of Fisheries and Aquatic Resources (DA-BFAR). Findings from these initial studies reveal the richness of the Benham Bank in marine biodiversity and productivity. For 2018, in collaboration with the Philippine Navy, UPMSI is again planning to conduct a follow-up cruise to the Benham Bank and areas along the Isabela coast and Bicol Shelf for coral reef assessment and oceanographic studies. This effort is being funded by the Department of Environmetl and Natural Resources-Biodiversity Management Bureau (DENR-BMB).

Crucial to the continued research in the Pacific Ocean is to ensure that our ocean class research vessel, the Philippine Navy’s BRP Velasquez, and our other research vessels (e.g. NAMRIA’s Presbitero and Ventura, DA-BFAR) are operating optimally with adequate and modern scientific and navigational systems (including information systems), properly trained crew for research vessel operations, strategic engagement of human resources, and sufficient funding for operations and maintenance.

Hence Filipino scientists from the various Philippine academic institutions had been working in the Philippine Rise with the support of national institutions such as UP, DOST, DA, DENR, Philippine Navy, NAMRIA since at least 2011, on our own and in collaboration with research partners from all over the world.  To declare otherwise is misleading and contrary to the truth.

The Marine Science Institute, UP Diliman