“Puppets and Shadows” of Love and War

Using rod puppets, shadows, dance drama and music, Teatrong Mulat ng Pilipinas (Mulat) staged the immortal epic “Ramayana” on Feb. 18-19 at the Institute of Biology Auditorium at UP Diliman (UPD) in celebration of UPD Month 2017. Entitled “Sita & Rama: Papet Ramayana,” the play, which was initially staged in 2004, was also in celebration of the 40th Founding Anniversary of Mulat.

“The play was originally staged in 2004 which helped us to be recognized among Asian puppeteers,” UPD Professor Emeritus Amelia Lapeña-Bonifacio said. Before 2004, “there was no Filipino play of the epic and I was encouraged to write one. At that time, Filipino puppeteers would just be among the audience watching other Asian countries performed their own version of the ‘Ramayana’,” she explained. Bonifacio, founder of Mulat, is also the puppet designer of Sita & Rama. 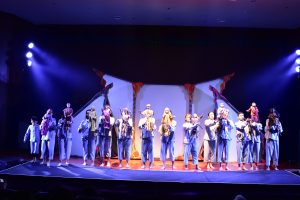 The puppeteers and the puppets

“The Ramayana, written by the wise man Valmiki, is one of the popular epics from India being read and performed in various parts of Asia. It is very influential even in Southeast Asia, thus, countries have their own version – ‘Ramakien’ (Thailand), ‘Hikayat Seri Rama’ (Malaysia), ‘Reamker’ (Cambodia) and ‘Maharadia Lawana’ (Philippines),” Dean Amihan Bonifacio-Ramolete, director of the play, explained in the director’s notes.

“It is believed that Dr. Juan R. Francisco [of the UPD Asian Center], an expert in South Asian studies, discovered the Maranao version of Ramayana,” Ramolete continued. She is the dean of the UPD College of Arts and Letters (CAL) and daughter of Bonifacio.

Story of love and good vs. evil. The play tells the story of two kingdoms – Ayodha in the north and Lanka in the south. Ayodha was ruled by King Dashrata who had four children with his three wives. The god Vishnu entered the body of the king’s oldest son, Rama, to stop the evil reign of King Ravana of Lanka. Because the god possessed his body, Rama had incredible strength which he used to win in a contest where the prize was the hand of a princess, Sita. 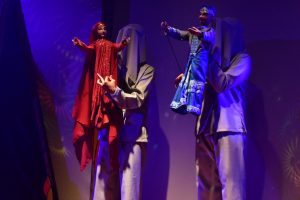 When the time came for Rama to be crowned as king of Ayodha, Dashrata’s second wife, Queen Kaikeyi, reminded him  of his two promises when she saved his life in one battle – to crown her son Bharata as king and to exile Rama in the forest for 14 years. To fulfill the king’s promises, Rama willingly left the kingdom accompanied by his wife Sita and his youngest brother Lakshmana, twin of Shatrughna. Bharata apologized to his brother after knowing what Kaikeyi did and Rama did not barbor any ill feelings.

In the forest, Surpanakha, sister of Ravana, saw Rama and fell in love with him but he rejected her. Lakshmana drove her away but in the process severed her nose. She went to her brother very infuriated with the insult she received from the siblings and persuaded Ravana to avenge her. Ravana was informed that Sita was beautiful and thought of a plan to abduct her to be his wife.

With the help of an army of monkeys led by King Sugriva and General Hanuman, together with bears and badgers, Rama and Lakshmana fought the forces of Ravana, defeated him and rescued Sita. Vishnu then exited the body of Rama after accomplishing his mission. 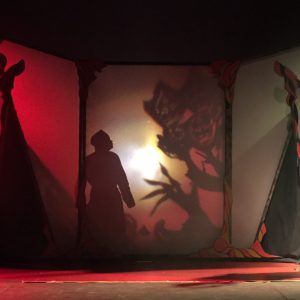 Battle in the forest – Rama (left) vs Ravana

After 14 years of exile, Rama, Sita and Lakshmana returned to Ayodha amid the celebration of the kingdom knowing their triumph over Ravana. Rama and Sita were eventually crowned the new king and queen.

Innovations. To show the relation of the epic with the Maranao version, costume designer Darwin Desoacido used Maranaoan-inspired dresses for the puppets, instead of the usual Indian clothes. In previous plays, the puppeteers wore dark colored costumes but for this play, light-colored textile was used. “This was the second time it was done. The objective is to make the puppeteers more visible to the audience and to effectively show ‘oneness’ of the puppeteers and the puppets,” Ramolete explained.

“Most Asian plays also begin with a prayer asking the blessing and protection of a known, or unknown, god, thus, we adapted that practice using an Indonesian prayer as a pattern,” Ramolete said.

The group. Mulat, a Filipino word meaning to awaken or open, aims to awaken the children to the beauty and richness not only of their own culture, but of still unfamiliar Asian cultures, according to the Facebook page of Mulat. 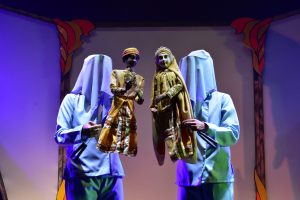 The crowned Rama and Sita

Bonifacio founded Teatrong Mulat ng Pilipinas in 1977 after seeing the zealousness of the participants of the play she presented at UPD upon the invitation of the Department of Speech and Drama (now the Department of Speech Communication and Theatre Arts). The play “Abadeja: Ang Ating Sinderela” is a puppet play based on a Visayan folktale about the Cindrella-like Abadeja. It was performed in cooperation with Dulaang UP and UP Repertory Company.

For 40 years, Mulat had perfomed 17 children’s plays, some based on Philippine or Asian folktales, like “Abadeja”, “Ang Paghuhukom” (The Trial, premiered in 1978), the annual “Papet Pasyon” (The Passion of Jesus Christ In Puppetry, 1985), the Philippine centennial piece “Dalawang Bayani” (Two Heroes, 1996) and “Sita & Rama: Papet Ramayana.”