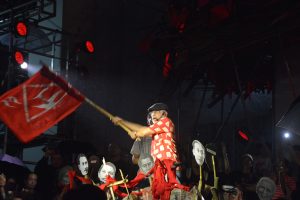 (FEB. 13)— Neither wind, nor rain deterred the hundreds of people who braved the bad weather on the evening of Feb. 7 as UP Diliman (UPD) celebrated the 50th year of the First Quarter Storm (FQS) with a grand public concert entitled “Konsyerto ng Bayan sa ika-50 Taon.”

The First Quarter Storm was a period of civil unrest during the first quarter of 1970 involving protest actions against the abuses of during former president Ferdinand Marcos’ dictatorship.

The historic Palma Hall AS steps served as the main stage while the portion of the Academic Oval in front of Palma Hall was closed off to make room for the large orchestra and chorus composed of the UP Symphony Orchestra, the UP Singing Ambassadors, UP Cherubim and Seraphim, UP Staff Chorale, and AUIT Vocal Chamber Ensemble.

The concert was written by Bonifacio Parabuac Ilagan—a multi-awarded screenwriter, filmmaker, playwright, writer and editor, directed by Chris Millado, Vice-President and Artistic Director at the Cultural Center of the Philippines (CCP) with music directed by Professor Josefino Chino Toledo of the College of Music.

For the next three hours the audience was treated to an audio-visual feast celebrating and recounting the events that led to that turbulent period, injecting it with allusions to similar developments happening in the current Duterte administration. 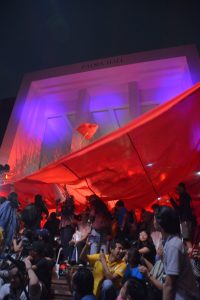 By the first hour of the concert, the light rain had turned moderate, potentially endangering equipment and performers, but the show went on along and the audience stayed to the end of the three-hour event.

Addressing the crowd, Chancellor Michael Tan encouraged the performers and educators present to find more ways to keep fresh the memories and lessons of the FQS.

The event was also the first time that “The Gathering Storm,” an art installation by Toym Imao was unveiled. Inspired by the barricades set up in the UP Campus during the Diliman Commune in 1971, the installation consisted of classroom chairs arranged in the shape of a dark, bloody cloud above the Palma Hall entrance.

The “barricades” of chairs, tables, and wooden poles are arranged and suspended to form a hovering storm cloud above the Palma Hall steps—the site of many mobilization rallies in the 1970s. 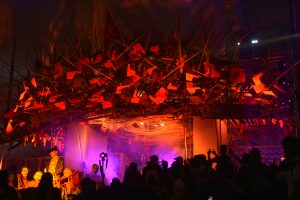 “The cloud formation acts as a visual metaphor for the brewing ferment and buildup of dissent against the dictatorship. It is a visual homage to the impending Diliman Commune a year after the FQS, thus, the ‘gathering storm,’” Imao said.

“Konsyerto ng Bayan sa ika-50 Taon” is the opening salvo of the UP Diliman Arts and Culture Festival 2020: Makita kang Sakdal Laya, a four-month series of events that celebrates the 50th anniversary of the FQS.—Anna Regidor, photos by Jefferson Villacruz