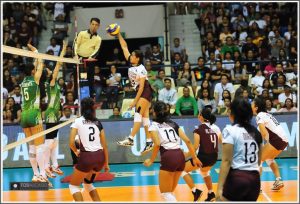 After an opening-set win, UP started slow in the second canto as DLSU pulled away and established a five-point lead, 17-12. The Fighting Maroons then regrouped and slowly crawled back to even the score at 19 apiece. The two teams then engaged in a toe-to-toe battle in the ensuing rallies. A service error by DLSU’s Aduke Ogunsanya put UP at set point, 24-23, but in the next play Justine Dorog’s attack was rejected by DLSU’s middle blocker, Des Clemente, to even the score at 24 apiece.

Another service error by DLSU and a Jesma Ramos’ kill from a free ball gave UP a 2-0 lead in the game.

At the third frame, DLSU Lady Spikers were ahead by a point, 17-16, when Fighting Maroons mounted a 7-1 rally to take the upper hand, 23-18. UP’s Marianne Sotomil had a service error giving DLSU a breathing room, but a counter service error by DLSU‘s Clemente placed UP at match point, 24-19. Isabel Molde sealed the Diliman-based squad’s victory via a thunderous kill.

Diana Mae Carlos paced the Fighting Maroons with 13 points, while Molde contributed 11 points. The victory put UP in a four-way tie at second place with DLSU, Far Eastern University and University of Santo Tomas.

The Fighting Maroons’ next game against Ateneo de Manila University will be on Mar. 30 at the Mall of Asia Arena in Pasay City. — Bino Gamba, photos courtesy of Tosi Alcasid